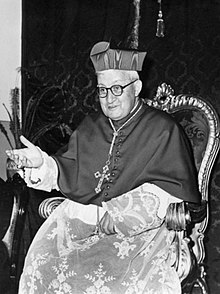 Arcadio María Larraona Saralegui joined the Order of the Claretians in 1899 and studied Catholic theology and philosophy in Lleida and Rome . In 1911 he received the sacrament of ordination . He then worked in various pastoral tasks for his order until 1918 and pursued further studies on the side. From 1918 to 1959 he was a lecturer at various Roman universities. At the same time, he held various offices in the administration of his order. He was an advisor to the Italian order province , visitor in Germany , general assistant for Italy , Central Europe and the Republic of China .

In 1943 he was appointed by Pope Pius XII. as Undersecretary, in 1950 as Secretary of the Congregation for Religious . Pope John XXIII took Arcadio María Larraona Saralegui in 1959 as a cardinal deacon with the titled deaconry Sant Biaggio e Carlo ai Catinari in the college of cardinals . Three years later he received his after appointment as titular pro hac vice of Diocaesarea in Isauria the episcopal ordination ; Co-consecrators were the cardinals Giuseppe Pizzardo and Benedetto Aloisi Masella . At the same time the Pope appointed him Prefect of the Congregation for the Rites . From 1962 to 1965 Larraona Saralegui took part in the Second Vatican Council .

He died on May 7, 1973 in Rome and was buried in the basilica Sacro cuore immacolato di Maria ai Parioli , where the Generalate of the Claretians is based.