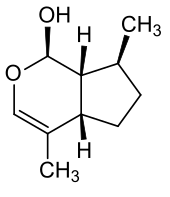 Iridoids are secondary plant substances that have been found in more than 50 plant families. There are now more than 2500 different iridoids known. The iridoids belong to the large group of terpenes or isoprenoids. The biosynthesis of the isoprenoids takes place mainly in the plastids . Iridoids are monoterpenes , which means that they are synthesized from two isoprene units - C5 bodies - and thus have ten carbon atoms (C10 bodies). In general, iridoids exist as bicyclic monoterpenes. The name of the basic body Iridodial and Iridomyrmecin are derived from the genus Iridomyrmex ; Iridodial was first isolated in 1956 in the defense secretion of the species Iridomyrmex purpureus .

Iridoids serve to ward off plants' predators, but they also have an antimicrobial effect and offer the plant protection against microorganisms (bacteria and fungi). Iridoids are characterized, among other things, by an exceptionally bitter taste. This keeps herbivorous insects and vertebrates ( vertebrates ) from eating.

Iridoids are often present in plant cells as glycosides , which means that they are often bound to a monosaccharide - often D-glucose - via an O-glycosidic bond . As a glycoside, they do not have any toxic effect on the plant itself, as they are readily water-soluble substances, like many other phytonutrients, and are probably stored in the cell sap vacuole . The compartmentalization within the plant cell prevents the glycosides from coming into contact with enzymes which can split off the covalently bound sugar and thus activate the iridoids. In fact, plants that synthesize toxic glycosides often have a "matching" enzyme that converts the corresponding glycosides with a high affinity . If the plant is now attacked by predators ( herbivory ), the compartmentalization within the plant cells is abolished by the eating by destroying the plant tissue. Glycosidases, which are often bound in the plasma membrane, can now come into contact with the iridoid glycosides released from the vacuole. The monoterpene is hydrolytically split off from the sugar molecule by enzymatic catalysis and the toxic aglycon is released. The aglycon is biologically very reactive. When the aglycone is released, the proteins in the immediate vicinity are denatured and lose their nutritional value.

In addition to the deterrent effect of the iridoids as bitter flavors, the consumption of plant material containing iridoid also has negative effects on the organism of the herbivorous animals.

There are different evolutionary strategies for how animals cope with toxic substances in their diet in the short and long term. A short-term strategy is this: Many animals simply avoid eating plants that taste bitter. If the environment allows, they just change the forage crop. Another possibility is a long-term adaptation to the toxic ingredients in the forage plants. Here the toxic plant constituents exert a strong negative selection pressure on the individuals and populations. Only those individuals can survive who have efficient detoxification mechanisms. Of course, the long-term survival of populations also depends on this .

Synthesis of iridoid glycosides in plants

The biosynthesis of iridoid glycosides has been studied since the late 1970s with the help of labeled iridoid precursors. It varies slightly with different genera. It can generally be assumed that iridoid glycosides are synthesized in plants starting from 8-epi-iridodial and 8-epi-deoxyloganic acid (see also Sampaio-Santos & Kaplan, 2001).

Synthesis and function of iridoids in animal organisms

Iridoids and their derivatives are not only formed in plants; to a small extent, iridoids or iridoid glycosides are also synthesized as chemical defense substances in a few species of insects and arachnids ( e.g. actinidine , chrysomelidial , dolichodial , iridodial , nepetalactone , plagiodial ). Iridoids are synthesized de novo by various leaf beetles (Chrysomelidae) and stored in defensive glands as defense secretions. Other leaf beetles take up isoprenoid precursors from their forage plants and use them to synthesize specific iridoids, which are also stored in the defensive glands. The isoprenoid precursors are taken up via the midgut wall of the beetle. In doing so, they pass through specific transport molecules (carriers) and reach the hemolymph. They are also transferred from the hemolymph via carriers to the defensive glands. The synthesis of the defense secretion then takes place in the defense glands themselves. When threatened, droplets of the defense secretion are excreted dorsally . As soon as a predator comes into contact with it, the strongly bitter taste prevents it from eating. If the animal interested in the beetle eats it in spite of the bitter taste, then the enzymatic cleavage of the iridoid glycosides described above also takes place in the intestine, which in turn has protein-denaturing effects.