russian map of the battle
Napoleon's Russian campaign in 1812

The Battle of Podobna (also: Battle of Gorodeczno ) was part of Napoleon's Russian campaign and took place on July 31st . / August 12,  1812 greg. instead of. The corps of things and Austrians used to secure the flanks of the Grande Armée defeated the Russian 3rd Western Army under Alexander Tormassow .

General Graf Reynier was Commander-in-Chief of the VII (Saxon) Army Corps of the great French Army . The task of the Saxons consisted in securing the flanks of the French main army in the Brest area along the Bug . The commander of the Austrian auxiliary corps, Prince Schwarzenberg , had received the order from Emperor Napoleon to cover the Duchy of Warsaw to the south and to unite with the Saxons in the Slonim area to secure the right wing of the great French army. The Saxon corps had advanced from Nieswicz via Kletsk, Bytyn , Chomsk towards Kobryn and arrived at Drohiczyn on July 26th . His cavalry, sent forward on the left, had already encountered Russian detachments at Pinsk , and General von Gablenz's Saxon vanguard had only been able to occupy the latter place on July 25th after a violent battle.

At dawn on July 27th, Reynier continued the march, marching 5 miles via Antopal to Horodez while the vanguard retreated from Janowo to Drohiczyn. The Saxon corps was still a few kilometers from Kobrin in Horodez and took a position against this city during the battle of Kobrin . Halfway to Horodez one could hear continuous gunfire and gunfire and there was no doubt that the brigade sent to Kobrin under Major General Klengel had to face a serious battle. The fire ended around 3 p.m. and the brigade had to surrender. General Reynier, deceived about the strength of the enemy he might have against him, by the news from the great French headquarters, now had to convince himself that his weak corps was no match for the vastly superior enemy forces. An officer who left Kobrin early brought him the news that this city had been threatened by strong Russian columns not only from Brest but also from the road he had traveled. A patrol sent ahead found the road to Kobrin already heavily occupied two hours before Horodez. To gain a head start, Reynier led his corps back towards Roszana on the night of July 28th . The next morning he learned of the fate of the Klengel Brigade and felt compelled to march back to Slonim in order to reunite with the Austrians on August 2nd.

The joint advance began on August 3, the Saxon corps advanced on the right wing of the Austrian corps and, with the outposts in front of Pruzana on the 7th, met the enemy who had started the pursuit from Kobryn with 8,000 men under General Lambert. Reynier attacked the Russians on August 10th and threw them back to Pruzana after a cavalry battle. The Russians withdrew even further as they were threatened by the Austrians on their right flank from Sieletz. As they retreated, they managed to secure the important, sparsely occupied bottleneck at Kossebrod.

On August 11, both corps marched on Kobryner Strasse through the Kossebrod narrow pass, the Austrians pursued as far as Horodez, the Saxons turned right on the road leading to Brest to the village of Zabin. Both corps camped here. The advance guard of the Saxons reinforced by the Austrian cavalry brigade under Zechmeister with a battery near Podobna. Beyond the village of Horodeczna there is an almost impassable morass that Kobyrner Straße cuts through. He begins an hour and a half to the right of the road in the woods, first walks on the left side of the road and then moves away from it. Extending far to the sides, it is enclosed by heights. To the north are the villages of Horodeczna, Zabin, Podobna, the road to Brest leads through both of the latter. General Tormasov, who had arrived shortly before, had taken up his position on the southern elevation. His right wing stood behind Horodeczna, the left ended not far from a forest towards which the southern heights gradually flatten out and which the road to Brest cuts through. The road leads here over the narrower, drier and almost without difficulty to traverse mire. Tormassov had occupied the only two safe crossings over these on the Russian front, but which were only a normal width of the road, at Horodeczna and Podobna, and had set up 30 guns before that and 12 before that. Incomprehensibly, however, he had completely disregarded the aforementioned forest near Podobna, on which his left wing was supposed to be supported. The Saxon vanguard managed to win the crossing point there on the evening of August 11th and occupy the forest on the other side with a battalion of light infantry.

The battle on August 12th 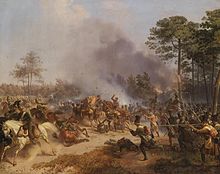 The strength of the Austro-Saxon troops was 38,000 men, that of the Russians a little over 30,000 men. Generals Schwarzenberg and Reynier recognized the weak point in the enemy lineup and decided to bypass their left wing. The Saxon corps, reinforced by the Zechmeister cavalry brigade, which had already been assigned to him, and an infantry brigade from the Bianchi division , was to carry out this evasion, while Schwarzenberg wanted to threaten the aforementioned crossings on the Russian front. At 9 a.m. Reynier began the movement and led the Saxon Le Coq division - 7 battalions left - and the two cavalry brigades through the wood occupied yesterday, on the edge of which it appeared at around 10 a.m. and which remained occupied by the 1st light infantry regiment. At 11 o'clock Reynier's column had developed: the left wing was not far from the occupied forest, the right the cavalry in the direction of Tebele, the enemy's retreat through which the road to Kobrin leads. While these troops were advancing to the heights behind the Russian position, the Saxon Sahr Brigade was also drawn through the forest and, united with the 1st Light Infantry Regiment, was set up as a left wing leaning against the mud in front of the forest, which has been occupied until now.

The Austrians had the Trautenberg division and the rest of the cavalry at Horodeczna a brigade of the Bianchi division at Zabin the Siegenthal division at Podobnaz the Lilienberg brigade assigned to the Saxons was still on the march. Tormasov, surprised by Reynier's appearance in his back at a point where he expected no attack at all and had only one cavalry division, led three infantry regiments opposite the Podobna towards him. Twenty-four guns reinforced this line behind the two dragoon regiments. Known for the strength and security of the points at Horodeczna and Podobna, he gradually withdrew almost all of his troops from there and took a position that was almost parallel to the previous one, but turned his back on the first front, so that his right wing was now on the swamp of Podobna stood opposite the often mentioned forest. This was formed by the Kamenski division , which was followed by that of General Markow and General Lambert; finally, with the left wing of the largest part of the two cavalry divisions, only two infantry regiments remained across the street from Horodeczna and Podobna. a dragoon regiment with the above guns. Tormassow particularly strengthened his now right wing and tried to throw back Reynier's left as the most important point of his position, which connected them with the Austrians in the forest behind it, during a brisk gunfire on both opposing lines. The Austrian brigade, which had to cover a distance of three hours, arrived at around 3 p.m. and moved with a battery into the line between the 1st Saxon division and the Sahr brigade .

Despite this reinforcement, Reynier could not dare a general attack on the enemy, who was still far superior, because the troops he was able to oppose Tormassow were only about 16,000 men. The middle of it was still in the briskest gunfire; with his cavalry on the right wing he continually threatened the enemy retreat to Tebele, which the Russian cavalry, however, maintained with equal tenacity. Several attacks by this cavalry were particularly thwarted by the excellent action of two Saxon batteries, while the Austro-Saxon cavalry, namely the Saxon regiment of Polenz and the Austrian regiment O'Reilly, made some fortunate attacks. The Russian right wing kept repeating its attacks with infantry and cavalry on the Saxon left, which was completely bared from the latter. Here the two grenadier battalions Anger and Spiegel had set up in squares and thus served as fixed bases for the two light infantry regiments, which were fighting mostly in extensive order. The uneven battle lasted with alternating luck until 7 p.m. Repeated attempts by the Austrians on the passes of Horodeczna and Podobna had been thwarted by the Russian gunfire. Now at last the Siegenthal division attempted a new attack on the Podobna pass, the brave Colloredo regiment , supported by gunfire, crossed the morass in drier places and united with the Saxon left wing. The Russian right wing was attacked again in the front by the Austrian regiment on the right by the two Saxon light infantry regiments and vigorously shot at by half a Saxon reserve battery on the left. Thereupon he began to give way and was now pursued by skilful skirmishers with fierce fire, which lasted for a long time in spite of the falling darkness.

The Austrian brigade now took up the position of the left wing, while the Saxon battalions, exhausted by almost eight hours of fighting, were placed behind them as reserves. So one passed the night in the position in which one had fought; an advanced skirmish line opposite the Russian guard chain. The positions of Horodeczna and Podobna were still occupied by the Russians when night fell, so Reynier feared his opponent might again throw himself on his troops on this side of the swamp with superior strength the next morning and urgently demanded support from Schwarzenberg.

Tormasov alone thought it advisable to withdraw, fearing that he would lose his retreat to Kobryn and be forced into the swamp if Reynier were reinforced by Schwarzenberg during the night. At dawn only a strong rearguard was visible at Tebele, which was attacked and ousted but withdrew in order to Kobryn. The swampy ground prevented the pursuit.

The Russians only lost 200 prisoners. The Saxon loss consisted of 1 officer, 174 dead; 671 men wounded in 17 officers; 66 men missing in 2 officers. The Austrian loss can only have been small; the Russians give theirs to 3000 men. The bravery of the Saxons, especially the Sahr Brigade and the light infantry, deserves just recognition.

It seems that the Battle of Podobna should have had a far more favorable outcome for the Austrians and Saxons. Since the bypassing of the enemy's left wing had once succeeded beyond expectations, only an Austrian division with sufficient artillery had to be used to threaten the often mentioned bottlenecks. This crossing would have been as difficult as it is useless for them. Furthermore, all of Schwarzenberg's other troops, especially his cavalry, could have followed the Saxons and thus perhaps won the road to Kobryn with superior strength.

But if the battle itself could have had a brilliant success, its consequence was always Tormasov's retreat beyond the Styr , which he crossed on August 29 at Lutsk .