Battle of the Amba Alagi

from Wikipedia, the free encyclopedia
Battle of the Amba Alagi
Part of: Italo-Ethiopian War (1895-1896) 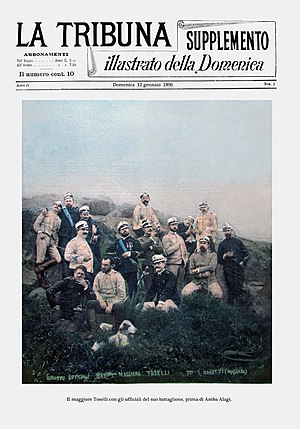 The Amba Alagi is known for three battles for the Amba Alagi , which were fought there by Italian units against troops from Ethiopia (1895 and 1936) and the British Commonwealth (1941). The Amba Alagi, with 3438 meters one of the highest mountains in Ethiopia , is located in the north of the country between the cities of Dese and Mek'ele .

After her victory at Debra Aila Italians in October 1895 were up to Amba Alagi pushed forward and had the intervention of the Ethiopian Emperor Menelik II. In the until then Tigray limited Ethiopian Italian first war provoked. On December 7, 1895, the Italian military base, consisting of up to 2,450 soldiers, was attacked by 30,000 and 50,000 Abyssinian soldiers, respectively. The Italians and their Askaris fought under the command of Major Pietro Toselli to the last cartridge and then fought with bare arms against the Abyssinian superiority. Reinforcements under General Giuseppe Arimondi came to the aid of the Italians, but these too were wiped out by the Ethiopians. Arimondi had to flee to Mek'ele . Hardly 200 to 400 soldiers survived on the Italian side.

During Mussolini's brutal conquest of Abyssinia in 1935/36, the Amba Alagi was captured by the Italians in February 1936. Previously, the Italian troops had to fight their way free in the battle of the Amba Aradam massif . At the Amba Alagi itself, there was then only weak Ethiopian resistance.

On the side of the Italian fascists, poison gas was also used, as Karlheinz Deschner explains in "With God and the Fascists" (page 29):

“After the so-called Battle of Amba Aradam, an Italian captain counted more than sixteen thousand 'enemies' mowed down. They lay dead and half-dead where the gas that was sprayed out of the air, burned the skin and tore the lungs, had reached them, and they were all disposed of together in the most hygienic way by flame throwers. "

During the Second World War , the Italian troops withdrew in the spring of 1941 during the British counterattack in the East Africa campaign under the command of Viceroy Amadeus III. from Savoy-Aosta from Addis Ababa to the mountain range around the Amba Alagi. There the Duke of Aosta wanted to defend himself to the extreme with his 7,000 men, as did Toselli in 1895. A strategically important traffic axis led over the Alagi massif, which was dominated at the top of the pass by the "Toselli fortress" and the adjacent Amba Alagi. There and on the surrounding peaks of the massif that ran from west to east, the Italians had well-developed defensive positions, over 40 guns and supplies for three months.

The units of the British General Alan Cunningham (25,000 Commonwealth soldiers and 16,000 Abyssinian volunteers) began on May 3, 1941 with a diversionary attack on the Falagà Pass in the far east, where the units of the Highland Regiment could not take any of the Italian positions. On the following day, thanks to strong artillery support, units of the 29th Indian Brigade took the three westernmost summit positions “Pyramid”, “Whaleback” and “Elephant”. The further advance of the British Worcestshire regiment failed on May 5th due to Italian resistance. In the meantime the 1st Battalion of the 12th Frontier Force Regiment had succeeded in overcoming the Falagà Pass and in the rear of the Italians to approach their Amba Alagi positions within five kilometers. Another advance failed because of the bitter Italian resistance.

In the following days, an additional South African brigade and Ethiopian volunteer units arrived from Dese and were immediately thrown against the Italian positions on the Twin Pyramids. These summit positions were taken after fierce fighting, with the Ethiopians killing almost all surviving Italians. This had been observed with horror in the surrounding Italian positions. The Italian soldiers threw back another Ethiopian attack on the adjacent triangle position with all their might. However, on May 14th, the South Africans managed to take this summit, whereupon the Italians retreated to Amba Alagi on the night of the 15th, coming from the west. The Amba Alagi was not fortified on the western side and the loss of the Triangle summit was a decisive advantage for the British leadership. In addition to the Duke of Aosta and his officers, many Italian soldiers also knew this. In order to prevent another massacre by the Ethiopians of Italian prisoners of war, the Duke of Aosta contacted the South Africans to negotiate with them about a cessation of the fighting. On May 19, 1941, the 5,000 surviving Italians and Askaris surrendered after two weeks of heavy fighting. An honorary formation of the Commonwealth troops said goodbye to the defeated opponents in captivity, which is still fondly remembered in Italy today.