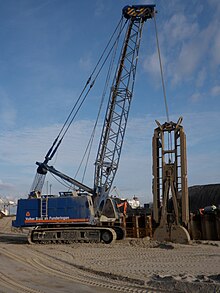 A diaphragm wall is a protective wall made of in-situ concrete or sealing material, which is produced in sections in a floor slot that is secured against collapse by a supporting liquid. The diaphragm wall is a Excavation of deep excavations or for deep foundations in use. As a special form, it serves as a cut-off wall in landfills or in open-cast mines .

A diaphragm wall that was initially built to secure the excavation can - like the bored pile wall - later become part of the building to be constructed, e.g. B. as a basement wall or underground garage wall.

The slurry wall was in the 1930s with basic studies on the support function of bentonite - suspensions by Christian Veder developed and introduced in the 1950s by an Italian construction company to deployment. A first patent for setting piles and the like with thick flushing was granted to the Düsseldorf construction company Carl Brandt in 1912, but was again forgotten. Veder's patent dates from 1950. In Germany, the first diaphragm walls were implemented in 1959 and 1960 by Polensky & Zöllner in Berlin and Munich in cooperation with ICOS Veder. Sheet piles in diaphragm walls were first installed in 1960 at the Stubenrauch Bridge over the Teltow Canal in Berlin. In the 1960s, the functionality of the diaphragm wall grab was further developed. The hydraulic diaphragm wall grab and the diaphragm wall cutter were introduced in the 1980s.

To stabilize the walls of the slot, a supporting liquid (usually a bentonite suspension, a mixture of bentonite and water) is poured into the slot. If the diaphragm wall is to seal against groundwater, the slot is made into a water-blocking soil layer, e.g. B. Sound .

Execution steps for a diaphragm wall

After digging the full depth of the slot, a reinforcement cage is inserted into in-situ concrete diaphragm walls and the supporting liquid is replaced with concrete or steel fiber concrete . For this purpose, a pipe (contractor pipe ) is lowered to just before the bottom of the slot, whereby the concrete reaches the bottom of the slot. The concrete rising from the bottom to the top displaces the supporting liquid, which is pumped out, sanded off by a regeneration system and prepared for further use. Usual diaphragm wall thicknesses are between 50 and 120 centimeters.

A variant of the diaphragm wall is the drainage wall, which can also be used to drain away the groundwater.

Another variant is the milled wall, in which the digging of the slot is not necessary, as the existing soil is mixed with cement paste as soon as it is milled . As a result, the soil solidifies itself into concrete. The quality of the concrete naturally depends on the composition of the soil layers. The introduction of reinforcing steel into the fresh concrete is only possible to a limited extent or not at all. This disadvantage can be partially offset by adding fibers.

In the case of a single-phase diaphragm wall , which is also known as a cut-off wall , a binding agent (usually cement ) is added to the supporting liquid so that the supporting liquid hardens without replacement. One application for this type of construction is a landfill seal to be created subsequently.

In order to increase the tightness, sheet piles can also be set or suspended in sealing walls before the cement-bentonite suspension stiffens , which are often used as support and sealing elements in construction pit sheeting.

Use in open-cast lignite mining

Diaphragm walls are also used in open-cast lignite mining in Lusatia . In order to open up the coal seams at a depth of 50 m to 70 m, it is necessary to lower the groundwater to this depth. By pumping it out, a far-reaching groundwater funnel would form - as a parabola with an assumed average inclination of 1/10.

In order to spatially limit the lowering of the groundwater and to reduce settlement damage to buildings and adverse effects on bodies of water, diaphragm walls with a depth of 70 m to 90 m are created as sealing walls around the opencast mine. The subsequent pumping action creates a groundwater jump on the diaphragm wall.

The Jänschwalde opencast mine, for example, is located directly on the border with Poland . A diaphragm wall was used here to limit the lowering of the groundwater to the territory of the Federal Republic of Germany.