Main building of the newspaper in Seattle, on the roof the characteristic PI Globe

The Seattle Post-Intelligencer (short form: PI ) is an Internet daily newspaper from Seattle , Washington state . The newspaper was first published in 1863, making it Seattle's oldest newspaper. The company has been owned by the Hearst Corporation since 1921 . After persistent financial losses and unsuccessful attempts to find a buyer for the newspaper, the print edition was discontinued. The last edition was published on March 17, 2009. This means that only the Seattle Times remains in Seattle as a daily newspaper.

The origins of the Post-Intelligencer can be found in the Seattle Gazette, first published on December 10, 1863 . The four-page weekly newspaper was published by James R. Watson, who, along with his printing press, a Ramage Model No. 913, moved from Olympia to Seattle. The said press had been built in Philadelphia some 40 years earlier and initially shipped to New York . It later came to Mexico, where it was used to print government edicts. After the Mexican-American War she went into private hands and before her time in Seattle also served in Monterey ( Californian newspaper , 1846), San Francisco ( Star , 1847), Portland ( The Weekly Oregonian , 1850) and Olympia ( Columbian , 1852 ) the printing of the first newspaper in these cities.

After initial difficulties and several changes of name and ownership, the paper came into the possession of Samuel L. Maxwell in 1867, who paid $ 300 for the printing press, subscriber list and other assets. He renamed the eight-page newspaper to Weekly Intelligencer . Seven years later, he sold it to his editor (and brother-in-law) David Higgins for $ 3,000.

Higgins bought a new printing press and later donated the old press to the University of Washington . In 1876 he began to publish the Intelligencer as a daily newspaper and as a morning edition. In 1878 he sold the Daily Intelligencer to its editor Thaddeus Hanford for $ 8,000. Seattle now had three newspapers. Hanford first acquired the other daily, the Puget Sound Dispatch , and shortly thereafter also the weekly Pacific Tribune . However, he ran into financial difficulties and in 1879 sold half of his stake in the Intelligencer to the former owner of the Pacific Tribune , Thomas W. Prosch. Due to continued difficulties, Hanford eventually sold its 50% stake to editor Samuel Crawford.

In the meantime, in October 1878, a new newspaper called The Post had come out, founded by Kirk C. and Mark Ward and funded by future Mayor John Leary. The newspaper had taken over the construction of its $ 30,000, three-story brick building. Therefore, Leary and the other financiers of the Post decided to work with the also battered Intelligencer . The first Post-Intelligencer appeared on October 3, 1881. Kirk C. Ward, however, went his own way and founded The Seattle Daily Chronicle , the forerunner of the later great rival Seattle Times .

By the turn of the century, the newspaper had 15 different owners and its name was changed almost as often. In 1911 the circulation was 31,000. William Randolph Hearst took over the newspaper in 1921, initially only secretly through an intermediary, and thus ended the period of frequent changes of ownership. It is still owned by the Hearst Corporation to this day . At that time, the Post-Intelligencer had a circulation of 62,000 (Sunday edition 138,600), the Times had 56,600 (Sunday edition 84,000). Hearst aligned the newspaper conservatively and supported the Republican candidates in the presidential elections of 1924 and 1928. In the Great Depression, however, in 1932 he switched to the Democratic candidate, Franklin D. Roosevelt . When Roosevelt won the second presidential election in 1936, the newspaper was on strike by the newly formed American Newspaper Guild and could not appear for almost four months. This marked the first major failure of the paper - even during the great fire in the city in 1889, the newspaper appeared without interruption, although the post-intelligence building was completely burned out.

After the Seattle Star was discontinued in 1947, there were only two daily newspapers left in Seattle.

Since 1983, the Post-Intelligencer and the Seattle Times had a Joint Operating Agreement under the Newspaper Preservation Act of 1970, which allows newspapers to regulate certain business areas together in favor of media diversity in contravention of anti-trust laws. So the advertising, production, marketing and distribution of both newspapers were carried out by the Seattle Times Company, and the costs were shared. The editors of the papers, however, were strictly separated. There was also a common Sunday edition.

In 2003 the Times tried to terminate the Joint Operating Agreement . The newspapers accused each other of trying to put the other out of business. After several trials, the matter was not resolved until 2007.

Sales plans and discontinuation of the print edition

In early January 2009, Hearst Corporation put the newspaper up for sale. Steven Swartz, head of the Hearst newspaper division, said the newspaper has been in the red every year since 2000. It lost $ 14 million in 2008, the circulation fell from 196,000 in 1998 to 118,000 in 2008. Given the US newspaper crisis and the financial crisis in general, analysts' expectations were low that a buyer would be found. Hearst had categorically ruled out a sale to the Seattle Times .

Since no buyer could be found within the specified 60 days, Hearst discontinued the printed edition in mid-March 2009: The last edition appeared on March 17, 2009. Seattle was together with Denver , where the newspaper The Rocky Mountain News was discontinued at the end of February one of the smallest cities in the US with two remaining large daily newspapers. The newspaper is to be continued as an online edition with a greatly reduced number of employees (from 165 to 20). The Joint Operating Agreement with the Times is no longer applicable due to the abandonment of the print business, so that 20 new employees are to be hired for advertising. 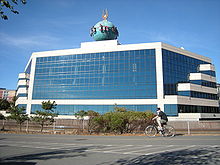 Main building with the PI Globe

One of the landmarks of Seattle is the 18.5 t heavy and more than 9 m high neon globe on the roof of the main building of the Post-Intelligencer . On it are the words It's in the PI (German: "Es ist im PI"), which rotate around the globe. An eagle sits on the globe with its wings stretched upwards.

The characteristic globe has served as the newspaper's logo since 1948. In a readers' competition to search for a new logo, Jakk Corsaw, an art student at the University of Washington, prevailed with his design from among 350 participants. Erected for $ 26,000, it has been decorating the roof of the main building since November 9, 1948 and was placed on the roof of the new building when it moved in 1986. The logo was used in the newspaper's headline and can also be found on the website.