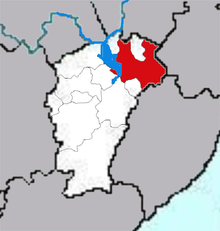 Location of Shangrao's in Jiangxi 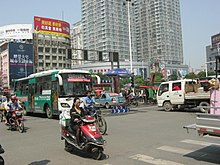 Shangrao ( Chinese  上饶 市 , Pinyin Shàngráo Shì ) is a district-free city in the Chinese province of Jiangxi . The administrative area of ​​the city has an area of ​​22,791 km² and approx. 6.75 million inhabitants (end of 2016). 298,975 people live in the actual urban settlement area of ​​Shangrao (2010 census). Wu is spoken in Shangrao . Uranium has been mined in Shangrao since the early 1960s ; the mining was important for the development of China's nuclear armed forces.

The following parts of this article appear since 2019 is out of date to be : the circle Shangrao there is obviously no longer, but a new municipality
Please help with to the missing information research and insert .

At the county level, Shangrao is divided into two districts , one urban district and nine districts. These are: