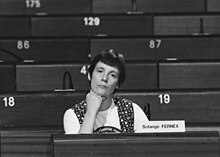 Solange Fernex (born April 14, 1934 as de Turckheim in Strasbourg , † September 11, 2006 in Biederthal ( Département Haut-Rhin ), France ) was an Alsatian politician , pacifist and environmentalist . She was particularly involved in the fight against the use of nuclear energy .

She lived in Biederthal in Sundgau , the southernmost region of Alsace (France).

In the 1973 elections to the French National Assembly , she was the suppléante (deputy) of Henri Jenn in a constituency in Mulhouse , the first French to campaign for votes in parliamentary elections (in the first ballot) with ecological questions. In the 1979 European elections , she and Philippe Dufetel from Toulouse were first in the list of the Ecologie-Europe political movement .

In 1983 she took part in a hunger strike for nuclear disarmament ( Jeûne pour la Vie ) in Paris for over 40 days . In 1984 she co-founded the French Greens . In 1989 she headed the list of Les Verts for the election of MEPs in the European elections . In 2001 she was awarded a prize for her commitment to nuclear disarmament.

In addition, she was among other things chairman of the French branch of the international organization Femmes pour la Paix et la Liberté ( Women for Peace and Freedom ).