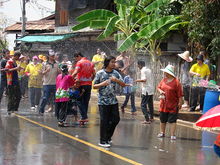 Street parade and water fight at Songkran 2007 in Uttaradit

The festival is celebrated in Thailand, Laos and Vietnam.

Songkran traditional: small amounts of water are poured on the hands of the elderly family members. 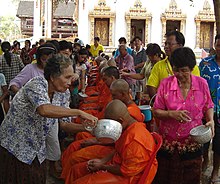 Almost all apartments are cleaned on the evening of April 12th. On the morning of April 13th, families go to the wats and offer rice, fruit and other foods there. Then in the afternoon the Buddha figures there and the head of the Wat are “bathed” by being doused with water. In many cities, such as Chiang Mai , the Buddha statues are then moved through the city in a procession to give other believers the opportunity to douse the statues with water as well.

Other traditional elements of this holiday:

The ritual ablutions have developed in the course of history in such a way that at Songkran all people pour water over each other. This custom, which begins before the actual festival and goes beyond it, is particularly excessive in larger cities, and even an uninvolved tourist can easily get wet. There are spontaneous moves of open wagons on the streets, on which the celebrants transport filled water barrels (often with blocks of ice) in order to refill water pistols, buckets and bottles again and again. In addition, you are dusted with (baby) powder or talc , or painted with it on your face.

Since excessive alcohol is also consumed during Songkran , there has been a dramatic increase in accidents (especially in road traffic), in which around 30,000 people are injured and several hundred people die each year.

Similar celebrations in other countries

Songkran is also celebrated in Laos , where it is Bun Pi Mai ("Celebration of the New Year") or Pi Mai for short ( Lao : ປີ ໃໝ່ , [ pìːmai ], “New Year”), but sometimes also Songkan ( ສົງ ການ , [ sǒŋkàːn ]) ) called. There is a similar festival in Cambodia , where it is called Bonn Chaul Chhnam Thmei ( only the first day of the three-day festival is called Maha Songkran ), in Myanmar (called Thingyan ), with the Dai people in Yunnan , China ("Festival of Throwing water ”) as well as the Tai Dam  in northwest Vietnam.

Other peoples of South Asia also celebrate this day, for example in Assam (Rongali Bihu) , in Bengal (Pohela Boishakh) , with the Oriya (Pana Sankranti) and in Punjab (Vaisakhi) . The Sinhalese and Tamil New Year celebrations in Sri Lanka also fall on this day.

In Nepal, the official New Year according to the astrological calendar Vikram Samwat is celebrated on the 1st of Baisakh (Baisākh). This day usually falls between April 12 and April 15.