City garden map. The green area in the northwest is part of Cologne's green belt . In the north is the pedestrian bridge to the Mediapark .

The Stadtgarten is an inner-city landscape park in the northern Neustadt of Cologne . It was Cologne's first modern park and is therefore under landscape protection and with its buildings under monument protection . Numerous events take place in the restaurant of the same name and in its beer garden.

Entrance gate on the corner of Venloer- / Spichernstrasse

The park is located southeast of the railway embankment that delimits the inner green belt with the Westbahnhof between Venloer Strasse and Gladbacher Strasse (more precisely, the small Gilbachstrasse). The Spichernstrasse separates it from the Neustadt. In the immediate vicinity, on the other side of Gladbacher Strasse, is Cologne's newest park, the Mediapark . Beyond Venloer Straße is the Belgian Quarter , a popular residential area in Cologne. The landmark of the area is the Colonius television tower in the green belt.

The park was created in 1827/28 on the site in front of the city ​​wall with its modern Vauban bastions as an ornamental garden with an attached provincial tree nursery . The Cologne gardening director Jakob Greiß was responsible for the planning . In 1857 exotic trees from the Botanical Garden on Maximinenstrasse were moved to the park when it had to be abandoned due to the construction of the Central Station.

In the course of the relocation of the Cologne-Bonn railway line to the west and the construction of the Westbahnhof, the city garden was then redesigned in the years 1888 to 1890 after an associated reduction from 11 to 6 hectares. The horticultural director responsible for the redesign was Adolf Kowallek , a student of the Berlin horticulturist Johann Heinrich Gustav Meyer , who initiated the Volksgarten movement. He also had the gardener's house built on Spichernstrasse. The restaurant was rebuilt in 1898. After the abandonment of the walls around Cologne and the historic city wall, the city architect Josef Stübben planned the park's dimensions from 1880 onwards . The late nineteenth representative buildings Spichernstrasse are once again a sought residential area. The last time in 1957/58 was the New St. Alban Church built on the north corner of the park . For the church and its visitors, the open park can be seen as an extended public space. The new urban development developments made it possible to connect the isolated city garden with the media park and the green belt. The green areas around the Christ Church on the other side of Spichernstrasse are to be included in a uniform green design of the district so that a line of sight from the park leads to this building.

The park, which was laid out in the manner of a landscape park, was intended to serve the citizens for recreation through walks and for edification by looking at the approximately 50 exotic tree and woody species that were planted. Some indigenous types of wood have developed by themselves. In winter the Atlantic , evergreen holly catches the eye. The herbaceous and perennial vegetation develops spontaneously today. After a habitat - mapping to about 80 species have settled, including rather rare for an urban habitat, such as the Great chickweed ( Stellaria holostea ) or Hain-sorrel ( Rumex sanguineus ). 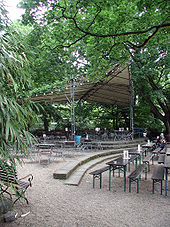 Stadtgarten is also the name of the concert hall on the edge of the park on Venloer Straße, which was set up by the “Initiative Kölner Jazz Haus eV” and grew out of the 1986 initiative of jazz-enthusiastic music students. It consists of a concert hall, a live club (JAKI) and a café-restaurant. A beer garden and a garden restaurant are connected.

With over 400 events a year, the concert hall's program covers a wide range of cultures. Concerts are at the center of the action, supplemented by contemporary literature and discussions. Two focuses are jazz and new improvisation music . Program director is Reiner Michalke .

The Stadtgarten - the concert hall and, since 2007, the park - is also one of the venues for the Cologne Music Triennale .

Christmas market in the city garden

A Christmas market has been taking place next to the concert hall and in the garden restaurant since 2006. In contrast to most Cologne Christmas markets, the dealers in some of the stalls change on a weekly basis.

In the summer of 2000, a support association was formed for the park under the name Pro Stadtgarten eV , which, in cooperation with the city of Cologne, supports the park with donations and campaigns, above all to bring it back closer to its historical appearance. The association includes residents and business people from the Stadtgarten district as well as the operators of the Stadtgarten restaurant.

On the initiative of the association, sound sculptures and sound walks were set up in the garden .