The step theory , developed by Jacob Gottfried Weber (1779–1839) and later expanded by Ernst Friedrich Richter (1808–1879), is, like the functional theory founded by Hugo Riemann (1849–1919) at the end of the 19th century , a means of descriptive analysis the harmony of a piece of music. Both systems have survived to this day with modifications and extensions.

With the help of the theory of degrees, the harmonic blueprint of a piece can be illustrated in a generalized way, so that comparisons to pieces in other keys are easier, since the symbols apply regardless of the key. At the same time, the degree theory provides reversed harmonic phrases (turns of phrase) that can be transferred to all keys.

The degree theory is based on the steps of that scale that provides the tonal material of the basic key of the piece. It was originally developed for diatonic scales such as major, minor or church keys . The following examples refer to such scales. In principle, however, a step theory is also possible for any other (traditional or newly invented) scale such as pentatonic scales , whole-tone scales , etc.

The pitches of the respective scale are numbered with Roman numerals . The numbering is therefore relative to the root note and avoids absolute note names .

Using the example of a C major scale:

A triad can now be constructed above each of these levels by layering two thirds on top. The tones required for this also come from the material of the scale, they are ladder .

Using the example of a C major scale:

Due to the different intervals of thirds within the chords, there are three different types of triads, whereby the frame interval for major and minor remains unchanged.

For example, a II in any major key always describes a minor triad, namely the triad that is formed with scale-specific tones above the second level of the respective scale.

If you consider the formation of chords for (natural) minor (here C minor), the following distribution results:

(Note: In practice, however, level V is also very often played as a major chord, but the third is not part of the natural minor scale.)

Extension of the level symbols

An expansion of the Roman numerals is necessary if

These cases are explained below:

It is possible to expand the starting triad by layering further thirds. The result is four notes, five notes, etc. This is indicated with (Arabic) numbers that are written in the top right (like an exponent) next to the Roman number. Its value indicates the interval of the additional tone in relation to the root of the triad: a 7 denotes the seventh , a 9 the ninth , etc. Since the intervals contain 1 (root), 3 (third) and 5 ( fifth ) in the triad anyway are, these tones are not designated as far as they are ladder.

Classical theory of degrees combines the keynote-oriented interpretation of the degree with the bass-oriented numbering system of the figured bass when identifying chord inversions . So it stands

Since this designation system is “thought around the corner” and difficulties arise due to the combination of different perspectives while simultaneously identifying chord inversions and additional tones, some degree theorists also use the numbering system of functional theory , which identifies bass tones with subordinate digits. Like the step interpretation, these digits are root-oriented and designate the interval of the bass in relation to the chord root:

Tones that are intended to replace a three-tone tone are also marked. The result are lead chords (the replaced tone is “withheld”. Often (but often not in jazz music) this lead is resolved in that the tone that is foreign to the triad is returned to the triad's own tone). The following applies: 4 replaces 3, 6 replaces 5, 9 replaces 8 ( octave keynote).

Since there is no uniform numbering norm within the theory of degrees, other possibilities of designating the above chords are also common. So the third from last chord (facd) is also marked as the second degree with superscript 6 and 5, since some degree theorists consider it to be the seventh chord of the second degree in the first inversion, i.e. in the fifth chord position. In fact, this interpretation is the closest, both with regard to the chord structure and with regard to the resolution towards the fifth degree, which takes place regularly in the sense of a fifth chord of the second degree. An interpretation of the same chord as a fourth degree with an added sixth ( sixth ajoutée ) is appropriate if the sixth is led upwards and the resolution takes place in the sense of a plagalous conclusion directly to the first degree.

The fifth of the triad is rarely affected, almost never the root note, but the third is all the more common. This is because the third (major or minor) allows the triad to be classified in major or minor. For example, if you want the fifth degree of a minor scale (originally this triad is a minor triad, see above ) with the leading tone characteristic of this degree in order to reinforce the dominant effect, the (minor) third must be increased by a semitone . This is done by placing a 3 with a cross ( ♯ ) to the right of the Roman number. Since the change of the third is the most common of this type, the 3 is often left out and only a cross is written. If you mean a different tone, this must be designated in any case. This can also be done with added or substitute tones if they are not intended to be ladder. A lowering of the tone is marked with a ♭ .

In contrast to function theory, step theory does not describe tension relationships between chords. However, since it is structured in a much more elementary manner, it has an advantage: With its help, some chords can be described in relation to other chords without a function having to be assigned in any case, as in the functional harmony, especially if this function itself is questionable . For the level theory z. B. in the context of C major the triad egh as III. Stage clearly and completely named, whereas in functional theory, depending on the context, it is to be interpreted either as a tonic counter-sound or as a dominant parallel.

The use of the level theory in many genres of music makes sense, especially if you want to describe sequences : The interval relationships between the chords can then be more easily recognized and often show musical relationships over longer stretches that are not so obvious when using functions.

If, in musical practice, a musical analysis is not as important as a quickly comprehensible, but nevertheless abstract description of a chord progression, the degree theory (or rather a degree notation) is often better suited than concrete chord symbols on the one hand and abstract functional names on the other. In jazz and popular music, the harmony sequence " II-VI " is generally known as one of the most widespread final turns.

Example of an analysis 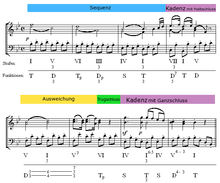 A simple example to show a sequence based on the level theory and at the same time to explain the various possible uses of level and function theory is a section from Mozart's Magic Flute from quintet No. 5: Sound example in MIDI format (2 kB)

Let's start with the first three bars, which are marked as a sequence:

The first two sounds IV are spaced a fifth apart (difference of four levels). The following sounds VI-III and IV-I behave in the same way . Alternatively, you could write VI-X instead of VI-III and IV-VIII instead of IV-I. However, levels X and VIII do not exist and are only used here to better illustrate the differences.
The sound sequence of the first bar is repeated from a different starting point, it is sequenced .
These starting points at the beginning of each measure (I-VI-IV) have the distance of a third (difference of two steps), alternatively VIII-VI-IV. Put in words, this would mean: The upward leap in fifths IV is repeated twice in the sequence, offset by a third. This sequence is apparently continued even in the fourth measure, because the bass note C would be the root note of the II, which appears in the correct sequence. More on this below.
The appearance of this note is brought about even more compellingly by the stepped bass line - it moves downwards in seconds and makes the levels V, III and I appear as sixth chords .

Anyone who has noticed the sonic similarity to Pachelbel's famous canon while listening to the example will find this confirmed in the analysis of the same: The chord progression DAh-f sharp-GDGA in D major provides the levels IV-VI-III-IV-I-IV -V . Although the piece is in a different key, you can see at first glance that the first six sounds behave in the same way as with Mozart, the sequence model is the same. Differences: with Pachelbel there are always triads in the basic position and the cadence at the end of the phrase is treated differently.

If you now look at the functions for this section - back to Mozart - it quickly becomes clear why the step theory is more suitable for describing these bars: Although there seems to be a certain regularity at the beginning, the elementary sequence TDTD suggests this. But at the latest with the appearance of the subdominant in the third bar, this regularity is destroyed. Furthermore, the description of the fourth sound as a dominant parallel is very misleading, as it no longer has a dominant character in this form. In addition, the result DS would be illegal in the strict sense of the word because of the opposite sensation of tension. (Nevertheless, this episode often occurs in pop music, for example, as it often works with plagaline conclusions : DST sounds very common here)

When the sequence of the first three bars has come to an end, the bass note C (root note of the II degree) is reinterpreted as the third of the VII degree or the fifth of the dominant. Here Mozart deliberately leaves the sequence model in order to intercept another movement in the same direction. The subsequent cadence ends with a half-close on the dominant. This is not uncommon, as the tension-relaxation principle is more the norm within an eight-bar movement . At this point, the theory of levels and the theory of functions are almost equivalent if one assumes that the fifth level is understood as a tense sound. Here, however, the experience that this level forms the dominant plays a role, so it is more a conceptual combination of the two theories.

In this section, the functional description would likely be preferred for a variety of reasons. At the beginning the long lingering in the dominant signals the evasion into it; the fallacy in the tonic parallel as a peculiar event appears just as clearer than the sequence V-VI; the appearance of the subdominant in the seventh measure clearly introduces the second “attempt” to establish the tonic, which is followed by a complete cadence with a full closure as a stereotypical sequence TSDT.

You can see how both theories complement each other well and have both advantages and disadvantages that can be easily circumvented with the other theory.