This article deals with the concept of musical sentence theory. For the same term in the Mass liturgy, see sequence (church music) . 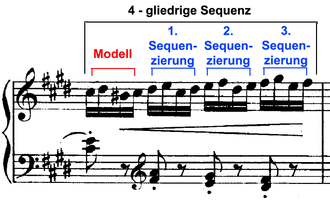 Sequence ( lat. Sequentia , "sequence") describes in musical sentence theory a temporal sequence of similar musical sections at different pitches . Each sequence consists of several sequence elements . It begins with a (melodic and / or harmonic) sequence model (motif or figure, or model for short ). The model is then repeated (sequenced) verbatim or slightly varied at other levels. This process is called sequencing . The same designation is used for the sequence elements following the model. An n-membered sequence therefore consists of the model and n - 1 sequencing.

Usually one speaks of a sequence in the actual sense only when the model is sequenced at least twice. A two-part sequence resulting from only one-time sequencing is also called a half -sequence or simply offset .

A frequent sequencing of short motifs or figures are also called chain sequence or sequence chain .

If longer sections are sequenced more than three times, there is a risk of a monotonous and unimaginative effect, so that this is sometimes contemptuously referred to as organistic brains. The equally derogatory terms Schusterfleck and Rosalie refer to a sequence pattern that has been considered trite since around 1750.

The variety of possible manifestations allows the following distinctions:

Example of a tonal sequence

The example shows the sequence in the interplay of a fugue . From a motivic point of view, all three voices are a tonal sequence that leads downwards in steps of one second. Each bar represents a sequence element. The circled tones of the bass voice form a fifth case sequence.

Example of a real sequence

In the example on the right, a musical section ("sequential element") is repeated three times at an interval of a minor third upwards ("sequenced"), so that a total of four-element sequence is created. A “wandering” modulation takes place, with the red marked tones in the bass (almost) going through the entire circle of fifths downwards.

The fifth case sequence (also called falling fifth step sequence) is a very common type of sequence in tonal music. (The also conceivable name of a fourth ascent sequence is not common.) What is meant is a chord progression whose root notes go down in fifths steps. Provided that sound the chords in the basic position, the bass goes, as a rule alternately in Quint cases and Quart leaps upward, thereby forming the whole a gradual downward movement.

The ascending fifth sequence is rarer, but it is also one of the sentence models that were taught in music education in the 17th to 19th centuries.

Sound sample fifth case sequence in A minor ? / i

In the example above, every note in the scale is the root of a chord. There is a reduced fifth step between the 5th and 6th bass note.

The example of literature (passage in E flat minor from Franz Schubert 's E flat major impromptu op. 90.2) corresponds exactly to the above school example in its harmonic sequence. The only differences are the other key ( E flat minor ) and the replacement of the fifth steps down by fourth steps up. The result is a four-part diatonic descending sequence in second steps, the parts of which are marked by red brackets. The sequencing is not an exact copy of the model, but rather differs slightly in its interval structure. The blue brackets mark another two-part sequence that is interlocked with the first. A comparison of the two sequences demonstrates the difference between a bottom case sequence and a fifth sequence (or in this case between their equivalent counterparts: Quart Stieg sequence and Quart sequence): The "red" Quart Stieg sequence consists of members, each including a fourth step of harmony basic tones, but even in Sekundschritten sequenced down become. So it is not a "fourth sequence", but a diatonic or second sequence . In the "blue" sequence (strictly speaking it is only a half-sequence or offset), however, there is a real fourth sequence because the one-bar sequence element with all voices is offset by a fourth.

The example above has fourteen steps as it steps the octave space twice. There is an excessive fourth step between the 2nd and 3rd bass note and a reduced fifth step between the 9th and 10th bass note. These tritone steps can be avoided by alternately noting triads in the basic position and as sixth chords : listen ? / i

In the triad of the seventh degree (3rd and 10th chord) the leading tone is doubled, which is normally "forbidden" and is only allowed in exceptional sequences like this one.

Only pure fifths down and fourths up are used here. There is a modulating tour down the circle of fifths. (In the fourth measure, G flat major is enhancedarmonically reinterpreted in F sharp major .)

Step-fifths and, in particular, case-fifths sequences have been found again and again in music literature for more than 300 years. As a particularly successful means of modulating or walking through a certain key , it can be found in all times and epochs. It was clearly themed by Simon Sechter (1788–1867), Franz Schubert's teacher . That is why the fifth case sequences are also referred to as the "sixth sequence".

They can be heard particularly frequently in music of the 17th and 18th centuries, in the baroque and classical periods . In the Baroque in particular, almost all modulations are made using sequences of fifths. One encounters particularly extensive fifth case sequences in the compositions of Claudio Monteverdi and Heinrich Schütz . Modulating examples can be found in almost all of Johann Sebastian Bach's works . The characteristic bass is only retained in the basic sequence forms.

Quint cases are a defining element in jazz harmony and can be found in many jazz standards, such as " Autumn Leaves " and " Fly Me to the Moon " as well as in rock and pop music , for example in "Still Got The Blues" by Gary Moore and " I Will Survive " by Gloria Gaynor (chord progression for both Dm - G - C maj7 - F maj7 - Hm b5 - E 7 - Am), or with Santana in "Europa" (Fm - B - Es maj7 - As maj7 ...). Taizé songs with sequences of fifths are " Nada te turbe " and "Miserere domini". This is only a small excerpt from songs and songs of all genres since the baroque. In the jazz standard "Fly me to the moon" the fifth case sequence with seventh chords, here in the key of A minor, can be found right at the beginning. (Compare first note example with chord symbols)