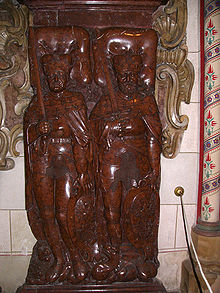 Svatopluk of Olomouc ( Czech : Svatopluk Olomoucký ; † September 21, 1109 ) was a Bohemian prince from the Přemyslid family .

According to the seniority principle , Svatopluk, the eldest son of Otto I of Olomouc ( Ota I. Olomoucký in Czech ) and Euphemia of Hungary ( Eufemie Uherská in Czech ), became Duke of Bohemia after the death of Vratislav II . However, Břetislav II prevailed on the throne . After his death, something similar happened when Břetislav's younger brother, Bořivoj II , claimed the throne for himself.

Svatopluk tried since 1105 to enforce his claim to the throne through campaigns, which initially failed. Through intrigue he managed to depose Bořivoj in 1107. He was arrested while trying to have his coronation legitimized by Emperor Heinrich V. He was to be released for a ransom of two and a half tons of silver, a sum he could not raise. Ultimately, Svatopluk promised to pay two thirds of the sum and participate in a war against Hungary, and was released.

For this benevolence that Emperor Heinrich V showed him when he conquered the throne, Svatopluk helped him in the wars against Hungary and Poland . In 1108, during the campaign to Hungary, Svatopluk and his army joined the emperor. But since at the same time Bolesław III. Wrymouth invaded from Poland via Silesia to Bohemia , the Bohemian duke had to withdraw to protect his own country. It is believed that the Poles were called by the Vršovci family, who themselves claimed the Bohemian crown ( Kosmas von Prag tells about a meeting of the Svatopluk opponents at the Schweinhausburg in Silesia). Svatopluk returned to Bohemia, drove out the Polish army and exterminated the Vršovci family in 1108 . During the later campaign against Hungary he lost an eye in Moravia . When he moved to Silesia with Heinrich V, he was murdered in ambush in 1109.

He had the son Wenceslaus I (Václav) with an unspecified wife .