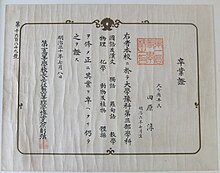 Correction sheet for an illustration of the conduction system of the mammalian heart (Oe Medical Archive, Nakatsu, Japan)

Tawara in a lecture at Imperial Kyushu University (ca.1919)

Tawara Sunao ( Japanese 田原 淳 ; native Nakajima; born July 5, 1873 in Aki (Kunisaki County, Ōita Prefecture ); † January 19, 1952 in Nakatsu ) was a Japanese pathologist who made a pioneering contribution to the elucidation of the conduction of the heart ( Excitation conduction system ).

Born in a rural area in the age of rapid modernization of Japan, Nakajima Sunao was adopted at the age of 19 by Tawara Shunto, a doctor practicing in Nakatsu , who had married an aunt of the young Sunao. Since he was chosen to continue the practice of his adoptive father, he was sent, like many up-and-coming contemporaries, to Tokyo , where he attended schools for English and German, and then switched to the elite high school No. 1 ( Dai-ichi kōtōgakkō ), which on preparing to study at the fledgling Imperial University of Tokyo . Tawara's graduation certificate from the summer of 1897 shows that, in addition to Japanese and classical Chinese, he also learned German, Latin, mathematics, physics, chemistry, zoology and botany there.

In 1898 he began his medical studies at the Imperial University of Tokyo, which he graduated in December 1901. He then worked as an assistant in the department of skin diseases, from May 1902 in internal medicine. In January 1903, Tawara, now thirty, traveled to Germany. The adoptive father bore the costs of the expensive trip and the two-year stay.

After a short stay in Berlin, he followed the recommendation of his compatriot Kokubo Keisaku and moved to Marburg to study with Ludwig Aschoff (1866–1942) at the Pathological Institute of the Philipps University in Marburg . Here he began with investigations into the pathological changes in the heart muscle , especially myocarditis , a topic that Aschoff pursued intensively at the time. Gradually he expanded the laborious examinations to "the assumed centers of the heart rhythm, the ganglion cells and the so-called atrioventricular connecting bundle". When the estimated two years were over and there were no sufficiently reliable findings, the adoptive father financed him at great sacrifice for another year in which the breakthrough occurred. Tawara discovered the node named after him and Aschoff, which he called the cardiomotor center of the heart in 1905 in his “Preliminary Communication” on the “Topography and Histology of the Bridge Fibers”. In 1906 he published a detailed description of his findings in the book The conduction system of the mammalian heart . In the same year Aschoff and Tawara published the book Today's Doctrine of the Pathological-Anatomical Foundations of Heart Failure .

In June 1906 Tawara started the journey home. In mid-August he reached Kobe and shortly afterwards Nakatsu. His book quickly caught the attention of professionals. It was unusual for a private citizen to go to Germany and to be appointed to an imperial institution after his return. Thanks to his groundbreaking research success, Tawara was appointed assistant professor of pathology at the Fukuoka Medical School , a branch of the Kyoto Imperial University founded in 1903, in early 1907 . In early 1908 he completed his habilitation at the University of Tokyo, followed in July by the appointment of full professor of pathology. In 1911, the Fukuoka Medical School merged into the newly founded Imperial University of Kyūshū , where Tawara worked until his retirement in 1933 - among other things as dean of the medical faculty (1930) and director of the Institute for Bath Therapy in Beppu (1931-1933 ).

In 1933 he reached the age limit and was retired. Tawara spent the remaining years up to his death in Nakatsu. When he died at the age of 78, he was posthumously awarded the " Order of the Rising Sun Second Class" ( 勲 二等 旭日 章 , Kun nitō kyokujitsu-shō ).

The scientific collaboration of Ludwig Aschoff and Tawara Sunao led to the second major discovery with respect to the cardiac conduction system, the AV node , the essential component of the conduction system of the heart is.

Tawara described the histology and the macro- or microscopic anatomy of the atrioventricular muscle connections as well as their division into the two main limbs in the animal heart (pigeon, rat, guinea pig, rabbit, dog, sheep, calf) as well as in the human heart. He presented the anatomy of the excitation conduction system from the bundle of His to the Purkinje fibers with extraordinary precision :

“As can be seen from the descriptions, the bundle in its previously mentioned part runs in a fairly consistent manner in all hearts, especially with regard to its position and coarser shape. As for the two limbs, the right one is always narrower than the left, and the former is separated from the ventricular musculature by a more or less thick layer of connective tissue. The left thigh is already quite wide from the beginning, downwards it becomes even wider, but at the same time thinner and finally splits into several groups. "