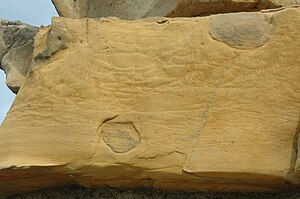 A plate structure is a secondary sediment structure that is caused by liquefaction or fluidization in unconsolidated sediment .

The plate structure ( English dish structure ), sometimes called plate and pillar structure called, was named due to its plate-shaped configuration according to the Household.

The plate structure was scientifically described for the first time in 1961 by Crook, who at the time still referred to it as discontinuous curved lamination (discontinuously curved storage). The actual term was first used in 1967 by Stauffer and von Wentworth. Extensive studies of the plate structure go back to Lowe and LoPiccolo in 1974 and to Lowe in 1975.

Description of the structure

Sketched plate structure from the Jackfork group. Almost perfect plate in red. Yellow arrows mark the escaping pore water flow. In blue, the edge of the plate bent by the flow of water

The more or less horizontal plate structure consists of two parts: the actual plate and its sediment content, which extends up to the next higher plate. The boundary layer marking the plate can assume various shapes, the design of which can range from very flat to bowl-like to extremely concave. The boundary layer consists of thin (around 2 millimeters), dark layers that are considerably richer in clay , silt or organic material than the surrounding sandy / silty medium. The individual plates are staggered. The plate width can vary between 2 and 50 centimeters, the vertical distance between the plates varies between less than 1 and 8 centimeters. Seen in the plan, the plate shape changes from circular / polygonal to elliptical / oval. The boundary layer stands out sharply and clearly from the surrounding sediment, but in higher areas the transitions become fluid.

Usually, the plates are separated from each other by vertical, massive strips of sand called pillars . The pillar structures can be relatively small (pillars of the A-type) or they can be quite large and continuous (pillars of the B-type), they then indicate and an increased water flow.

Within a single layer of sediment it can often be observed how the rounding of the plate increases with a simultaneous reduction in width towards the top. 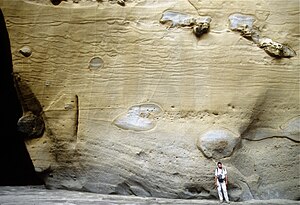 Plate structures can occur in long-lasting locations, but overall they are not too common and usually only indistinctly developed. Their medium is usually coarse silt, but the structures can also be found in all types of sand. However , they are never found in clays and gravels . Sediment layers with plate structures are normally graded .

Facies areas in which plate structures develop are predominantly the deep sea, especially the lower continental slope . The structures can be found in coarse-grained turbidites and in associated, highly concentrated mass transports (grain flows, fluidized flows & liquefied flows). But plate structures also occasionally appear in shallow marine, fluvial and lacustrine environments ; they have also been observed in delta sediments . A special feature are volcanic ash layers deposited in the marine environment, which either have plate structures themselves or can induce them in the underlying sediment.

Within the Turbidite, plate structures are mostly limited to the Bouma C position , but can occasionally also be seen in Bouma B.

Good examples of plate structures come from the Jackfork Group in Oklahoma , from Turbidites of the Ordovician near Cardigan in Wales , from deep-sea fans near San Sebastian in Spain and from the Cerro Torro Formation in Chile . Enormously large plate structures can be found at Talara in northern Peru .

Plate structures were still considered to be primary sedimentary structures until 1974 . Their formation was associated either with the mechanical conditions of the sediment transport or with the deposition conditions in highly concentrated mass transports. Lowe and LoPiccolo were the first to recognize the secondary nature of these sedimentary structures, which form immediately after deposition. The secondary nature of the structures is essentially based on the drainage of water-saturated and not yet solidified, rapidly deposited sediment layers.

The fact that plate structures have formed after their deposition can occasionally also be observed in cut or offset primary sediment structures (such as convolute storage ).

The dewatering process that begins in the freshly deposited sediment due to the overpressure is hampered by the enriched clay fraction of less permeable layers. The pore water flow, which normally strives upwards, is consequently forced to move sideways until there is another possibility of ascent. This laterally directed water flow causes a density sorting in the sediment flowing through - small grain sizes such as clays are initially still moved, but then remain behind and (due to their electrostatic properties) ultimately accumulate on the permeability barriers, which ultimately form the clay-rich boundary layers of the plate structures. The edges of the plates are bent upwards at the points where the pore water escapes . If the pore water escapes in a sudden, powerful manner, the sand is fluidized and carried away; the pitches are split up and drainage channels are created - the pillars. A modification are cylindrical pillars (drainage cylinders) that can reach a diameter of up to 10 centimeters and a length of 23 centimeters. In the thick sandstone banks of turbidites, the pillar length generally increases towards the hanging wall. The bank then usually closes with convolute bedding.

Plate structures are good indicators of the slope direction of the respective sediment.