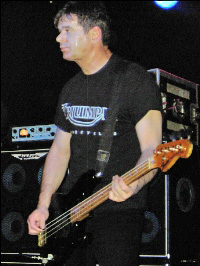 The Stranglers are a British punk rock - band whose music by influences of new wave , punk and rock Psychedelic is embossed.

In 1974 Hugh Cornwell , Jean-Jacques Burnel , Hans Warmling and Jet Black joined forces in Guildford, England, as Guildford Stranglers ("The Stranglers of Guildford"). The Swede Hans Warmling got out after a year and was replaced by Dave Greenfield . In this line-up they played together until 1990.

The Stranglers began as a pub rock band - they wrote and played rock tracks that they performed in pubs due to the lack of other performance opportunities. Through personal friendships with u. a. the Sex Pistols , Joe Strummer and Chrissie Hynde and through appearances as the opening act of early punk icons like the Ramones or Patti Smith they approached punk and increased the tempo of their songs. With the resulting, independent musical style, which at the time contained punk and psychedelic rock elements and was dominated by Burnel's bass playing and the swinging organ Greenfields, they soon attracted attention and thus came to a record deal in 1976. In 1977 they were able to place three singles in the British top 10, including No More Heroes and Peaches . In the song lyrics, the life of the underdogs was often thematized and brought into parable-like forms (The Raven, Tramp, Down in the Sewer), while the decadent way of life in the upper classes was targeted (London Lady, Goodbye Toulouse, English Towns). Primitive text passages alternated with more demanding ones. The use of symbolic animals such as the raven and the rat , the latter repeatedly appearing in the lettering of the band name, set the tone.

After arguments and fights with journalists, the band had a brief low point around 1980 when they ended up in prison in Nice for inciting unrest and singer Hugh Cornwell had to serve a prison sentence for drug possession. After that, the band's musical style also changed. While the first three studio albums were still clearly punk-heavy and established the reputation that has continued to this day as an outstanding early punk band, the 1980 album The Gospel According to the Meninblack experimentally ushered in a phase of demanding pop music. This phase would determine the style of the band throughout the 1980s and continued to bring commercial success.

The 1981 album La folie contains the Stranglers' greatest hit, Golden Brown , with which they were also successful on the continent for the first time. Until the mid-1980s, they had numerous hits and could land on a regular basis in the charts, including with songs like Strange Little Girl, No Mercy, Big in America and Always the Sun .

After the end of the 1980s the success waned and the Stranglers only attracted attention with cover versions and remixes of their old hits, Cornwell separated from the band and pursued a solo career. Since then, the band has returned to their original style. Supplemented by Paul Roberts and John Ellis, who has since been replaced by Baz Warne, the band continues to this day and regularly releases albums and singles.

The singer Paul Roberts left the Stranglers in mid-2006 to intensify his solo project. Guitarist Baz Warne and bassist JJ Burnel have shared the vocals ever since. Vocal tracks from the album (Suite XVI) , released in October 2006, were re-recorded by Baz Warne.

In 2004 Jean-Jacques Burnel wrote the title and closing credits of the anime series Gankutsuou - The Count of Monte Cristo .

In 2012 the Stranglers released the album Giants, the songs of which were written in Bath , England .

Jet Black has not performed since 2015 due to age, but is still a permanent member of the band. Jim Macaulay has been the tour drummer for performances since 2013.

On May 3, 2020, keyboardist David Paul Greenfield died at the age of 71 from complications from Covid 19.

Commons : The Stranglers  - Collection of Images