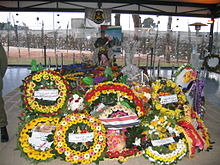 The funeral wreath (also: funeral wreath ) is an element of sadness culture . As a symbol in the custom of the dead, its circular shape without beginning or end ( see also Ouroboros ) symbolically expresses eternity and stands in a tradition that starts from the wreaths of ancient times and the Christian martyrs' wreaths and found its way into the sepulchral culture as early as the Baroque .

Up to the end of the 19th century, the funeral floral wreath, like the dead crown, which has the same meaning here, was only common at single funerals. Around 1870, pearl wreaths and wreath bows made of atlas , taffeta or paper with the names and last greetings of the wreath donors appeared. At the same time, the means of transport for flower donations called wreaths or flower wagons came into vogue as part of the funeral conduit for civil burials. In today's funeral culture, the desire for charitable donations in the name of the deceased is expressed in the formula “instead of wreaths”, which uses the funeral wreath as pars pro toto for the floral funeral donations .

As a circle with no beginning or end, the funeral wreath stands on the one hand as a symbol for eternity and thus also as a sign of life after death. On the other hand, it expresses the bond between the deceased and the bereaved, beyond earthly death.

Today, funeral wreaths made of flowers and fir green, which are decorated with funeral ribbons, are common. The ribbons carry a final greeting from the bereaved to the deceased and expressions of condolence to his family. Sizes between 60 and 90 cm are common. The branches of evergreen plants such as fir trees or conifers are used as the basis for the floral arrangements; like the circular shape, they symbolize infinity. Its green color stands for the hope that after death a new life awaits the deceased and that he and his relatives will be reunited in this next life. At the same time, the color has a calming effect.

The floral decorations commonly used on the funeral wreath consist of callas , lilies , chrysanthemums , roses , carnations and gerberas , often in white or light shades. Each of these flowers has its own meaning: roses stand for eternal love and are usually reserved for the wreaths of close relatives. Carnations express loyalty, chrysanthemums represent sincere feelings towards the deceased. For centuries, lilies have stood for purity and faith, while gerberas are meant to tell the deceased that they have beautified the lives of their loved ones. White is chosen as the color for the funeral jewelry because it expresses innocence and purity . The mourning is expressed through simple, withdrawn colors.