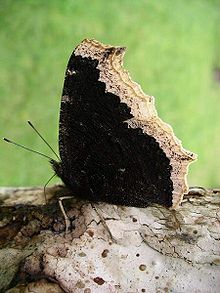 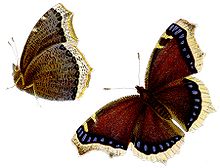 Illustration by Jacob Hübner (around 1800)

The mourning cloak ( Nymphalis antiopa ) is a butterfly ( butterfly ) from the noble butterfly family (Nymphalidae). The specific epithet is derived from a Greek female name.

The moths reach a wingspan of 55 to 75 millimeters. The top of their wings is mostly dark brown-purple in color. The edge is cream to light yellow and slightly jagged. After wintering, the yellow edge fades and is then white. Behind the yellow border is a black border that includes numerous blue spots lined up in a row. On the leading edge of the wing you can see a light spot on this dark edge and another a little further inside. The underside of the wings is predominantly colored black, beyond that there is only the yellow edge, the color of which is significantly paler than on the upper side. The undersides of the wings are similar to the upper sides, but irregularly dirty in color. The dark area has light spots and the light edge is dark.

The caterpillars are 50 to 55 millimeters long. They are colored black and have very fine, white dots. They have characteristic red-orange spots on their backs. In addition, they have long, black thorns and are hairy white.

The moths occur all over Europe  - except in northwest Scandinavia and the far north - and in Asia , east to Japan . They are also native to large parts of North America , but, as elsewhere, only occur in areas with a continental climate . They live mainly in light, open and moist deciduous forests , but they can also be found in orchards and on avenues. They fly up to an altitude of about 2000 meters.

The imagines rarely suck on flowers but mostly on tree sap and fallen fruit. Only in spring are they often found on willow blossoms. They are migratory butterflies and spread as soon as they hatch. The moths overwinter, for example, in knotholes and wall crevices.

The mourning cloak flies in one generation from the end of July and after wintering until June. So, apart from the winter months, you fly all year round, with the exception of a summer break between June and July. The caterpillars can be found in June and July.

The caterpillars feed mainly on birch trees such as B. Silver birch ( Betula pendula ) and broad-leaved willows such. B. Sal willow ( Salix caprea ) and also of elms ( Ulmus ).

The females lay their eggs in groups of 100 to 200 in thick rings that are not closed on thin branches of the forage plants. The hatching caterpillars live together and systematically eat one branch after the other. After the last moult, they live in small groups on different branches. When they are fully grown, they start looking for a suitable place to pupate. In doing so, they sometimes cover long distances. Pupation takes place on rocks, walls and bushes in a light brown to grayish tumbled pupa . Many caterpillars are attacked by parasitoids such as ichneumon wasps and thus perish. The frequency fluctuations in which the moths occur are probably due to the strength of the parasite infestation. The mourning cloak was one of the well-known types with which temperature tests were carried out (for example the Standfuss series of tests or the Frings temperature tests ).

The mourning cloak is now classified as more or less endangered in many parts of Europe and its populations are in decline, especially in Central Europe. Exceptions are humid and cool regions. For example, they can be found in the mountains.

The German name "Mourning Cloak" reflects its appearance. In the 17th and 18th centuries, light-colored cloth bandages, so-called pleureuses , were attached to the sleeves of the male, black mourning costume . The mourning cloak reminded people of this very clothing because of its light edges on the otherwise dark wings.

The scientific name is reminiscent of Antiope , who in Greek mythology fathered two sons with Zeus , Amphion and Zethos . She had to give them both away and live in exile with King Lycus . His wife Dirke was very jealous, so that Antiope had to flee into the wilderness. There she met her two sons and Dirke again at a party. Dirke ordered them to have Antiope dragged to death by a bull. It was only by chance that the twins recognized Antiope and so they tied Dirke to the bull. Since Antiopia became known because of sad events, the mourning cloak is named after her.