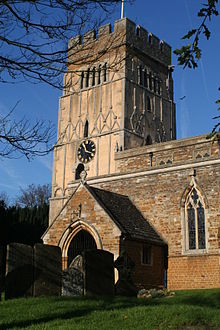 In Western Europe, especially in Spain and England, there are tower churches with a stocky tower that encloses a small church hall, to which a choir is occasionally attached. The tower can also stand between two rectangular church rooms. Probably the oldest of these churches, the wall structure of which is considered to be a translation of a wooden structure into a stone structure, is in Earls Barton .

In Russia in particular , important tower churches such as the two-story Ascension Church in Kolomenskoye , the first Russian combined cross-domed and tent-roof church made of stone (1532), or the central Church of the Protection and Intercession of the Virgin Mary 's Cathedral were built are among the masterpieces of national architecture and have replaced the Byzantine building tradition with its compact, massive shapes and domes. The traditional Byzantine type of cross-domed church had already been replaced earlier in the north of Russia by slimmer forms, which, however, did not develop further in the spirit of Western European Gothic due to the Tatar invasions .

The Russian tower church of the 16th century is described as an intermediate form between the Asian and European cultural areas; its polygonal tent-shaped roof is traced back to the wooden churches of northern Russia or the steppe tents of the Tatars, which were integrated into the Russian Empire at the end of the 16th century after their khanates were broken up. The triangular gables or kokoschniki and round arches arranged in the form of scales are also counted among the Asian elements . In addition to St. Basil's Cathedral, the tower church in Kolomenskoye is one of the masterpieces of national architecture.

The famous 34-meter-high, multi-tiered wooden Tikhvin Church in Torzhok in Tver Oblast (1717) has an open roof; the view up is not limited by a so-called "sky".

In Germany, the Russian Memorial Church, a tower church based on Russian models from the 16th century, was built in Leipzig . It was built in 1913 to commemorate the Russian soldiers who died in the Battle of Nations and modeled after the church in Kolomenskoye.