Udars is a district of the municipality of Schaprode in the north-western part of the island of Rügen . Udars is located south of the road from Schaprode in the west to Trent in the east not far from the Udarser Wiek . The name comes from the Slavic language area ("udarzici" = "the men of Udarg") and was probably the Slavic seat of a prince.

The first written records date from the early 14th century. The owners were the von Pentz families (before 1408), von Barnekow and, until the Reformation, the Hiddensee monastery . After that, the place was under Dominial ownership . The last duke from the Pomeranian family of Griffins, Bogislaw XIV. , Established the property around 1624 as a widow's residence for his wife Agnes, and combined the three farms that had existed up to then to form the Agnesenhof estate.

The sister of the last Pomeranian Duke, Duchess Anna von Croÿ , received Udars as a gift in 1629. Her son Ernst Bogislaw von Croy sold Udar in 1657 to the Stralsund council family von Wolfrad, which after 1734 gave it to the von Usedom family on Kartzitz. This held the estate with around four hundred hectares on the Udarser Wiek until around 1901. After that, a bourgeois owner acquired the estate, but soon passed it on.

His successor Fritz Kroos built workers' houses at the entrance to the town after 1920. During the Great Depression , the property went bankrupt and was divided up by the Berliner Siedlerbank and sold to families mainly from Holstein, who set up smaller farms with 20 to 35 hectares here.

Karl von Schultz-Granskevitz took over the main building, the manor house, the inspectorate and a smaller area along with the estate park and the garden plot to the west of it . Up until and after the end of the war, the Udars mansion was used in rapid succession as a hospital, and after the expropriation of the building used by the Red Army and a refugee residence. Karl von Schultz from the old von Platen-Granskevitz family on the Rügen was abducted by the Soviet military administration in Germany in 1945 and has been missing since then. 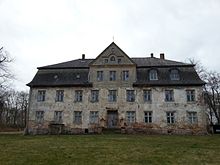 The Udars mansion is a nine-axis building of around 16 × 34 m, which was built around 1660 over a much older building. A Gothic cross-vaulted cellar under the south side of the house comes from the origin . The northern basement area is walled up and filled with sand. Presumably plague deaths were buried here before 1650. In the early summer of 1994 this walled area was explored at three locations with larger boreholes for sampling purposes, but nothing of the sort was found.

The two-storey plastered building with drilled plasterwork on the windows and pronounced corner rusting has a high, crowned mansard roof with gables to the east (courtyard side) and west (field / park side), as well as some dormer windows from this period.

The simple staircase with baroque plank balusters , the servant's staircase , the baroque entrance door (partially covered later), some interior doors and windows, two open chimneys in the large hall on the first floor, some simple stucco moldings in the old rooms and sparse ones have been preserved from the renovation in 1660 Remnants of textile wall coverings. In the ground floor side corridor at the southern side entrance, an open chimney was uncovered that dates from before 1660.

At the beginning of the 1950s the manor house became part of the "Association of Nationally Owned Goods, Schwerin". Until 1994 it was then an employee residence for the VEG ( Volkseigenes Gut ) animal production Granskevitz, whose last director was Eckard Daberkow. Thereafter, Matthias Graf von Krockow acquired the manor house and the small park, the renovation of the house he had planned was still in its infancy.

Various concepts were developed for the use of the building. Udar was supposed to be a branch of the Pomeranian State Museum for temporary exhibitions, and a butterfly park was also planned. The remaining investment sum was not financed due to the lack of official approvals for renovations, new builds and changes in use. Since 2004, the Udars mansion has been owned by a family from Kempten who sold it to a Scandinavian private citizen in 2012.

The building was already under monument protection during the GDR era and after joining was included in the list of historical monuments of the Rügen district under No. 764.

The regional vernacular reports of an underground passage that should lead to the manor house in Streu-Schaprode, and the ghost of the last Countess Usedom, who died in Frankfurt at the beginning of the 20th century, far away from the island of Rügen, is said to be in the house. A puck is also said to be at home on Udars, which came from Scandinavia via Holstein four hundred years ago.