Pottery of the Valdivia culture

Valdivia is the name of a pre-Columbian culture whose artifacts were found along the rivers of the coastal region of Ecuador . It existed between the 40th and 18th centuries BC. Chr. , And which forms Mature Formative period (3900-2300 v. Chr.) In the history of Ecuador.

Distribution area of ​​the Valdivia culture

The Valdivia culture got its name from the small coastal town of Valdivia in the province of Guayas - eponymous type locality as well as the first site of its artifacts. The culture also spread over the provinces of Santa Elena , Los Ríos , Manabí and El Oro . In addition to the type locality, important sites of the culture are the place San Pedro , the Loma Alta located in a coastal valley and Real Alto in the valley of Chanduy ; also subordinate to the localities Aguadita, Clementina, La Centinela, La Emerencia, La Lora, Pueblo Nuevo, Punta Concepcion, San Isidro and San Pablo. A total of more than 150 sites are known.

The culture was discovered in 1956 by the Ecuadorian archaeologist Emilio Estrada , who researched it together with Clifford Evans and Betty Meggers until his death in 1961 . Evans and Meggers described the ceramics of the Valdivia culture as descending from the Japanese Jōmon culture of Kyūshū and consequently assumed contacts between both cultures. This theory was largely rejected early on. However, recent genetic haplogroup investigations suggest that contact with Japan is quite possible.

Hill (1975) distinguishes four stages with a total of eight phases (from young to old) for the Valdivia culture:

The data are radiocarbon data calibrated with CalPal.

The Valdivia culture was one of the first Neolithic cultures on the American continent. It had emerged in the area of ​​today's Ecuador from the even older Las Vegas culture (8000 to 4600 BC), but the transition was not seamless, but marked by a caesura of more than six hundred years.

Most of the settlements of the Valdivia culture were located on hills and were generally built around a central square, which the dwellings girded in a circular, U-shaped or elliptical manner. Round to oval post huts with a diameter of up to 3 meters served as dwellings. The mostly rectangular square was aligned with its longitudinal axis in a northerly direction and served as a public meeting place. The largest Valdivia settlements took up over 10 hectares of land. The religious center Real Alto, for example, had 12.4 hectares and consisted of around 50 to 100 huts, its population is estimated to have been between 1500 and 3000 people. In the later phase, ceremonial hills were raised, which could be reached via a ramp or steps from the central square; they were arranged as a pair, dividing the square into two halves, which were connected by a corridor between the hills.

The livelihood of the sedentary people was based on agriculture , fishing (even fish remnants from the deep sea could be detected) and the collecting of marine and crustaceans such as crabs , but game was often stalked as well. Vegetable remains show that corn , red kidney beans , pumpkin , cassava and chilli have already been grown. Cotton was also cultivated to make clothing. The Valdivia culture also knew simple looms a thousand years before the Peruvian coastal civilizations . Also rubbing stones and hand rollers were used.

Ceramics and works of art 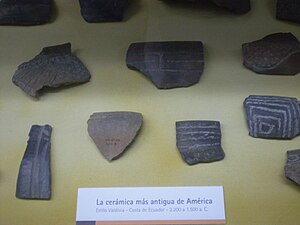 The ceramics of the Valdivia culture were originally quite coarse and purpose-built, but they have been refined and perfected over the years. This trend also applies to stone processing. Usually red and gray goods were made, but Valdivia pottery is characterized by polished, dark red vessels. Bowls and jugs were made with either a short or a raised rim. The jugs were usually kept simple and were used to store food supplies. The bowls, however, were richly painted in bright colors; in them food and liquid was served and a use as ceremonial drinking vessels is to be assumed. The imprints of corn kernels were found on some vessels - an indirect reference to corn cultivation.

A specialty are mortars carved in stone as animal motifs ( jaguar and parrot ) , which were mainly used to crush food and spices, but were probably also used in the ritual preparation of coca .

The culture is known for the Venus de Valdivia . This forms part of small figures that represent women with very clear sexual and fertility characteristics in a very schematic form , as is the case with the Venus depictions of Neolithic cultures around the world (see also Venus figurines ).

The female figures usually have a very elaborate hairstyle, their face often shows incisions, arms and legs are only hinted at, the arms are often completely missing. Pregnant women are also shown. In their conception, these figurines are very similar to the statuettes by Tlatilco .

For cult activities, masks were made from painted and pierced mussel shells .

The Valdivia culture was very early in cultural connection via the coastal region of Ecuador with the north coast of Peru . The influence of the northern Peruvian Cerro-Narrío culture (around 2800 BC) with thin-walled ceramics in the late phase of the Valdivia culture is clearly noticeable.