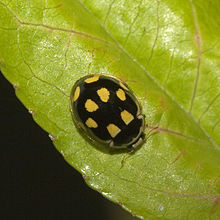 The fourteen-point ladybird or checkerboard ladybird ( Propylea quatuordecimpunctata ) is a beetle from the ladybird family (Coccinellidae). It is one of the most common ladybird species in Central Europe .

The beetles are 3.5 to 4.5 millimeters long and have a huge variety of shapes. There are well over 100 different color and pattern variants. Some deviate so much that they were initially thought to be separate species. The beetles are light to bright yellow and each have seven black, almost rectangular spots on the wings . However, these can also expand and grow together so far that the yellow almost completely disappears or the animal looks as if it has yellow dots. The sash seam is mostly black throughout. The pronotum has four to eight black spots, mostly fused together, and is otherwise light yellow in color, usually only at the edge. Their antennae and legs are yellow-brown.

You can find this species all over Europe from the southernmost part to the Arctic Circle but also in Asia . They live from low altitudes to the subalpine zone and can be found on hardwoods and herbaceous plants almost everywhere in meadows and fields, in forests, gardens and parks.

A female lays around 400 eggs. This is necessary because there is often a high mortality among the larvae . These can only develop under ideal conditions (ideal weather conditions, enough food ...). The beetles overwinter twice, sometimes in the attics, in the wild in the litter.

These animals, like most ladybugs, feed on aphids , which is why they are considered very useful. A larva can eat up to 20, a beetle even 55 aphids per day.