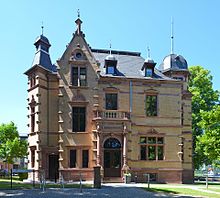 Entrance facade of the Villa Belgrano

Villa Belgrano with light installation by the Kunstverein Mittelrhein - KM 570

The Villa Belgrano is a summer house in Boppard on the Rhine , which was built by the architect August Heins at the end of the 19th century . Today the villa is used as a conference center for the Rhineland-Palatinate Municipal Academy .

Around 1880, Franz Mallmann, who lived in Argentina, commissioned his brother-in-law August Heins, who moved from Berlin to Boppard in 1877, to build him a villa there. August Heins was an architect and had already earned a reputation for building the Villa Thonet and the neo-Gothic royal villa. He also developed the plans for the reconstruction of Schönberg Palace . The businessman Franz Mallmann, born in Boppard in 1846, emigrated to Argentina in 1867 and wanted to use this villa as a summer house for his wife, as it did not tolerate the Argentine climate at this time of year.

At the end of the 1880s Mallmann acquired the area necessary for the villa and park, including a 2800 m² vineyard in Leiergasse, the so-called Villa Somborn, and two smaller winegrowers' houses for a total of around 150,000 gold marks. On November 5, 1889, the city council approved the construction plans. Thus, the work on the two-storey Villa Belgrano could begin in the forms of late historical neo - renaissance made of yellow brickwork and red sandstone, which was completed in autumn 1891. The building was named Villa Belgrano by Belgrano , a suburb of Buenos Aires , where the Mallmanns lived. Due to the time-consuming journey from Argentina, the family only spent a few summers in their villa.

From 1898 the villa had a changing history, initially a Mr. Eich from Cologne auctioned the building including the 7,200 m² property for 115,000 marks, in the 1900 address book Mr. Berg, director of the Märkische Bank in Bonn, was listed as a resident. In 1903 the pensioner Heinrich Weltmann from Brussels bought the entire area for 144,000 marks in a foreclosure auction. From 1909 the villa belongs to the entrepreneur Heinrich Weltmann, whose son-in-law ran a family doctor's practice here from 1910 to 1913. After the villa was temporarily uninhabited in the 1920s and 1930s, the Saarland entrepreneur Willi Maurer acquired the entire complex in 1938, but initially was unable to implement his plans due to the outbreak of World War II.

After the Second World War , the villa became the seat of the French command in the Middle Rhine Valley . In 1949, Willi Maurer, the inventor of Rei in der Tube , then finally founded his company in Boppard and used the property to set up a business premises. He used the villa as a residential and office building and an administration and production building was later built in the park of the villa. In 1965 the company was sold to the Procter & Gamble group and relocated to Koblenz. Thereupon his brother Heinz Maurer temporarily took over the property for his own company sebapharma .

In 1969, the Boppard spa, which was founded in 1950, acquired the villa, including the extensions, in order to use it as a spa clinic with 70 beds and a Kneipp bath after various renovations from 1971 . However, the Kurbetriebsgesellschaft had to file for bankruptcy in February 1997 and was closed. After that, the buildings were initially empty.

In 2001 the Hospital of the Holy Spirit Foundation acquired the area for 3.2 million euros. From 2004 to 2009 the lower floor of the building was available to the Kunstverein Mittelrhein eV (KM 570) for exhibitions of contemporary art and installations. The Association of cities and municipalities in Rhineland-Palatinate in 2009 earned only the villa without the surrounding area and left the building by February 2011 restructure in order to use it later as a seminar building of the Municipal Academy. The renovation and renovation was financed from the economic stimulus program from 2009. A retirement home was built in the former park of the villa after the existing buildings were demolished.

The Villa Belgrano now serves as the conference center of the Rhineland-Palatinate Municipal Academy. In addition to the offices of the municipal academy, five seminar rooms have been set up here, the ground floor mainly serves as a lounge and communication area and is also used for various events.

The entire complex, consisting of the villa and park, has been protected as a registered cultural monument in the sense of the Monument Protection and Maintenance Act (DSchG) of the state of Rhineland-Palatinate since 2001 . In addition, it has been part of the Upper Middle Rhine Valley UNESCO World Heritage Site since 2002 .