The title of this article is ambiguous. Further meanings are listed under birdsong (disambiguation) .

The acoustic communication of birds , particularly songbirds , is called bird song (regionally, historically and also from a literary point of view, also known as bird strike ) in the German-speaking world . In birds, sound is usually generated in the vocal head .

Bird singing is a complex behavioral performance. Birds sing among other things to attract partners and to mark their territory. This gives females information on the performance and health of an applicant.

The songbirds (Passeriformes) provide complex bird songs . The singing of many species of this order is structured like stanzas and often very varied. Even house sparrows and house martins have more than one type of stanza. In comparison to other bird species (Nonpasseriformes), the song of songbirds is not innate, but has to be learned. There is, however, a predisposition for the species' own singing, so that even a few or one time perception of a singing conspecific can lead to learning success. There are species-specific learning phases (time windows) for learning how to sing birds , which work in a similar way to an imprinting mechanism . For males, they are usually in the first season they experience when their conspecifics begin to sing. Male songbirds growing up in isolation also sing, but often with clearly different patterns. Differences in singing behavior can be made visible with sound technology and oscillographic comparisons. Singing behavior depends on several factors: the environment , genetics and the learning process .

Among the native birds, for example, the nightingale has a very complex song. The reasons why some species sing in a very complex way, while others sing rather trivially, are not fully understood. Songbirds show a more pronounced territorial behavior, however, the more talented they are, i.e. the talent to sing correlates with the intensity of the territorial defense. Musical aspects should therefore be understood as why songbirds with complex chants ( blackbird , song thrush , nightingale, robin , etc.) behave in a soloistic and aggressive manner towards other conspecifics, while songbirds with simply structured chants (house sparrow, house martin, etc.) are sociable and compatible. This solo behavior of singingly gifted songbirds is also evident during the migration period , because songbirds with complex songs often migrate individually or in very small groups and mostly at night.

A separate area of ​​research has developed around the behavioral question of how young birds learn their parents' song. In the 1960s, for example, Peter R. Marler demonstrated on the basis of observations and experiments using the example of the roof chambers of the Golden Gate Park in San Francisco that juvenile birds were able to reproduce the song of their species as nestlings at the age of 10 to 50 days by imprinting older conspecifics - usually from their father - learn at a time when they are not yet singing. This interpretation of the behavioral observations, referred to by Marler as the auditory template hypothesis (analogously: hypothesis about templates created by the hearing center), combined the model, character and the gradual adaptation of the self-produced sounds through 'practice' to the sounds heard in the model to form a functional whole . Until the 1980s, however, there was still no evidence of the nerve cells from which the suspected 'auditory template' is built. The first evidence of this was provided by the experiments of Allison J. Doupe , whose model animals were male zebra finches , who also 'stored' their father's song in their memory during a sensitive phase in their youth, “and later they practice and perfect their song by compare their song with the memory of his. ”Doupe succeeded in identifying a network of sensorimotor neurons (technically: anterior forebrain pathway) in the forebrains of young birds , in which individual neurons respond selectively to their own song, but not to their song of an adult role model. She interpreted her findings as meaning “that every time a young bird practices its song, the electrical excitation conducted via a motor path is compared with a parallel excitation of those neurons [in the original: sent through the song-learning pathway ], in which the template of adult singing was saved. "

Birds on a tree, gathered around a sheet of music (painting around 1900)

Birdsong are often perceived by people as pleasant and pleasant. It was used a lot in art and culture and represents models for instruments and tone poems. In the past, it was often assumed that birds sing out of the joy of life or to edify the environment. The true meaning of bird song was only revealed by behavioral biology: it was Bernard Altum who, in his book Der Vogel und seine Leben (1868), was the first to propose a theory of territory formation in birds and their territorial behavior, taking into account the function of bird song.

Singing birds are caged by different cultures around the world. Some species sing very loudly in captivity and to the point of complete exhaustion, especially if they have no contact with their sexual mates or are kept together with other singing birds, against whose proximity they want to distance themselves. In Europe, isolation is no longer common, but it is widespread worldwide. Every day, thousands upon thousands of singing birds are offered for sale in cages at Beijing's historic bird market . Similar markets exist across Asia, South America, and many other countries. Singing birds are a popular form of entertainment.

The singing behavior of birds can be influenced by certain housing conditions and various feed additives.

Use of birdsong in music

The chirping of birds is imitated in some pieces of music. For this purpose, the recorder heads or special bird call whistles used. These instruments are also very popular as children's toys, but so is the palate pipe for imitating bird calls.

The bird lover Wolfgang Amadeus Mozart is said to have been inspired for many of his works by the singing of his star .

The work of the French composer Olivier Messiaen (1908–1992) is heavily influenced by birdsong. Messiaen recorded bird calls while traveling around the world and used them in piano works, orchestral works and his opera Saint François d'Assise . 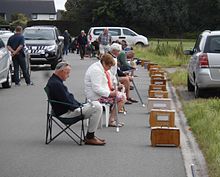 Chaffinches are kept to be used in competitions. In this sport, practiced in Germany and Belgium , finches are placed in covered cages and the singing of the individual animals is assessed. In Asia , the United States , Germany, the Netherlands and Belgium, competition crows are also organized, in which the frequency or length of the crow calls by roosters, mostly from specially bred breeds of chickens , are counted.