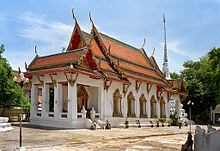 Wat Suwannaram was built by King Phra Phutthayotfa Chulalok ( Rama I ) on the foundations of Wat Thong (also: Golden Monastery ), a temple from the Ayutthaya period , which is why it is nicknamed Ratchaworawihan. He was mentioned in the Royal Chronicles of Thonburi in connection with King Taksin's efforts to restore ancient Siam after it was destroyed by the Burmese in 1767. Until the beginning of the 19th century, cremation celebrations for deceased members of the royal family took place on the site of the temple .

Wat Suwannaram is famous for the beautiful wall paintings in the Ubosot , perhaps the finest Siamese paintings of the early 19th century. Two artists, Thong Yu and Pae Khong, created this masterpiece. The last ten Jataka (Thai: ทศชาติ ชาดก - Thotsatchat-Chadok ) are shown; the wall above the main entrance facing the bronze Buddha statue shows the submission of the Mara , the story of Prince Vessantara (Thai: มหา เวสสันดร ชาดก - Maha Wetsandon Chadok ) occupies the entire wall to the right of the Buddha image, on the wall on the left are the other nine jatakas. A schematic “cross section” of the Buddhist worldview with Mount Meru in the middle is located behind the Buddha statue.

The Buddha figure itself, sitting and calling the earth as a witness with the right hand, called Pang Man Wichai ( ปาง มารวิชัย ) in Thai , comes from the Sukhothai period, it is said to have been made at the same time as the Buddha figure Sri Sakyamuni of Wat Suthat . It was probably brought here from Sukhothai and restored during the reign of King Phra Phutthayotfa (Rama I) . Your dimensions are: height about 4.25 meters and about 3.25 meters from knee to knee.