Wat Suthat (full name: Wat Suthat Thepwararam Ratchaworamahawihan - Thai: : วัด สุ ทัศน เทพ ว รา ราม ราชวรมหาวิหาร ) is a Buddhist temple ( wat ) in the district of Phra Nakhon from Bangkok , capital of Thailand . With an area of ​​about 40 hectares, it is one of the largest temples in Bangkok. King Rama I (Phra Phutthayotfa Chulalok) had it built for a Buddha statue from Wat Mahāthāt in Sukhothai , the eight-meter tall Buddha Shakyamuni .

Wat Suthat is located in the heart of the old town of Bangkok, the so-called Rattanakosin Island, on Bamrung Mueang Road in the Phra Nakhon district .

Directly in front of the temple is Sao Ching Cha , the "Big Swing". In earlier times it was the scene of a multi-day brahmanic ceremony in honor of the Hindu god Shiva every year . Across the street from Bamrung Mueang Road is the Devasathan , a small Brahmin temple area where the preparatory ceremonies for the swing ceremony were held.

King Rama I (Phra Phutthayotfa) ascended the throne of the Siamese Empire in 1782 as the first ruler of the newly established Chakri dynasty . With his new capital, Bangkok, he intended to build a replica of Ayutthaya , which had been completely destroyed by the Burmese 15 years earlier. Artists, architects and craftsmen should build the royal palace, the city walls, city gates and the royal temples exactly after the model Ayutthaya.

The center of the then capital was chosen as the building site for the central temple, just as Mount Meru is the center of the universe. Both the plan of the entire complex and the architectural style of the buildings should take Buddhist rules and symbolism into account. The entire layout should be "systematically, neatly and carefully executed so that this temple becomes the dignified showpiece of the whole country".

Directly in front of the city of Ayutthaya, the temple Wat Panang Choeng is still today, which is home to an enormous Buddha statue. The king wanted such a representative temple in his new capital as well. To this end, he commissioned Phra Phirenthorathep to bring an almost eight meter high Buddha statue from Sukhothai across the Mae Nam Chao Phraya ( Chao Phraya River ) to Bangkok. The huge bronze statue was then in Wat Mahathat , the main temple of the historic capital Sukhothai, of which only ruins are left.

The foundation stone of the new temple was laid on Sunday, February 1st, 1807 on the site next to a Brahmin monument called Sao Ching Cha . The following year the boat with the huge Buddha statue reached Bangkok. She was moored at Tha Chang ("Elephant Pier") across from the Royal Palace. The statue was unloaded and brought to the temple construction site in a solemn procession. There it was installed as the center of the new Wihan with a seven-day celebration , later the building around the statue was completed.

Now the king could name the temple. His preferred name was "Wat Maha Suthawat", but there were other names such as "Wat Phra Yai" ("Temple of the great Buddha statue") or "Wat Sao Ching Cha". Most recently they agreed on the current name "Wat Suthat Thepwararam". This name refers to the divine city of the god Indra in the Tavatimsa heaven. The king died in 1809 without witnessing the completion of the temple.

King Rama II (Phra Phutthaloetla) continued the expansion of the Wihan. As he himself was artistically gifted, he personally lent a hand when the huge entrance doors of the Wihan were to be decorated with carvings. The original door leaves are now in the Bangkok National Museum . The king also sent a Buddhist embassy to Sri Lanka to obtain offshoots of the original Bodhi tree from Anuradhapura , under which the Buddha is said to have experienced his enlightenment. An offshoot was planted in Wat Suthat, another in Wat Mahathat and one in Wat Saket . In 1824 the second king died before the temple was completed.

During the reign of King Rama III. (Phra Nang Klao) the construction work could finally be finished. The king also had an ubosot ("ordination hall") of comparable size built, in addition a Sala Kan Parian ("preaching hall") and the sanghawat, the living area for the monks . Finally, a Kampheng Kaeo ("wall of jewels") was drawn around the entire complex. In 1843 the first abbot could take office. Finally, in 1847, a grand opening ceremony was held. A total of 40 years passed from the laying of the foundation stone to the inauguration of the temple. 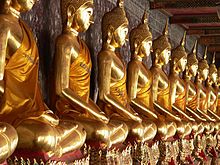 The layout of the temple grounds can easily be compared with the symbolic structure of Mount Meru, as planned by King Rama I (Phra Phutthayotfa) more than 200 years ago.

On the evening of the Visakha Bucha festival 2000 in front of Wat Suthat, Bangkok

Himaphan wall painting in the Ubosot