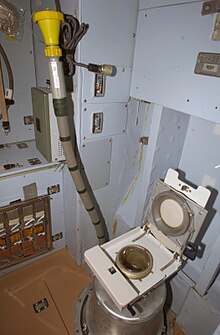 Toilet in the Zvezda module on board the ISS

A space toilet is an on- board toilet that works in weightlessness and is used on board spacecraft or space stations . Various systems have been developed and used since the beginning of manned space travel .

On the Apollo flights used the crews bag , the Apollo bags, and on spacewalks , if necessary, special diapers . Salyut already had a toilet with a curtain and another additional mobile system. Excrement was collected in a container, sealed and dumped into space weekly.

Schematic layout of the toilet on board a space shuttle .

Claude Nicollier has to use the manual to fix a defect in the toilet during STS-46 .

A toilet on board a spaceship works with negative pressure, with which the excrement is sucked off. In weightlessness these would otherwise be distributed everywhere. In order to be able to build up the necessary negative pressure, the hole is very small, so you have to know exactly how to sit down to hit it. Liquids are sucked off with a hose. In the toilet, liquid and solid parts are separated with a blower and pumped separately into special containers for disposal. These are stored on board the ISS in the Progress capsule and disposed of with it. Liquids were also pumped outboard on some missions (including the Apollo missions ).

In the US sitcom The Big Bang Theory , space engineer Howard Joel Wolowitz is responsible for a defect in the ISS toilet.

In October 2016, NASA called on the interested public to take part in an ideas competition for a new space toilet system for a launch-entry suit . The aim is to develop an in-suit waste management system that can be used by crews for up to 144 hours. Out of more than 5000 design proposals, three were selected in February 2017, which may be included in future developments at NASA.

On February 4, 2019, NASA reported a problem on the ISS toilet that had leaked 11 liters of fluid.