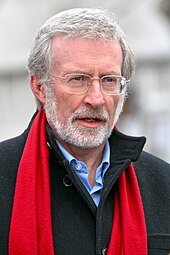 Werner Mezger (born June 10, 1951 in Rottweil ) is a German philologist and folklorist .

After graduating from high school at the Albertus-Magnus-Gymnasium in Rottweiler, Mezger studied German, history and empirical cultural studies at the Eberhard Karls University of Tübingen . In 1975 he passed the state examination and received his doctorate in the same year. From 1977 to 1996 he worked in high school education, at the same time he regularly taught folklore at the University of Freiburg . Mezger completed his habilitation in 1989 with a paper on the idea of ​​fools and the custom of carnival . Since 1996 Mezger has been Professor of Folklore in Freiburg im Breisgau and Director of the Institute for Folklore of the Germans of Eastern Europe there (formerly Johannes Künzig Institute for East German Folklore ). In 2001 Mezger turned down a call to the chair of folklore at the University of Bonn .

Mezger is married, but now lives separately and has two children.

Since 2005, Mezger has been a member of the board of trustees of the German Childhood Cancer Care Foundation for the chronically ill child in Villingen-Schwenningen, which supports seriously ill children and their families.

Mezger published numerous works on folklore with an emphasis on the Swabian-Alemannic Carnival . In addition to scientific work, this also includes radio and television broadcasts on ethnological and regional topics. Since 1992 he has been a regular commentator on the live broadcasts of Südwestrundfunk (SWR) from the Fasnet. He is also the author of the VSAN Code of Standards for the membership of the Swabian-Alemannic Carnival on the national list of intangible cultural heritage. Mezger's publications on the history of the Fasnet, like those of Dietz-Rüdiger Moser , expressly place Carnival as a festival during the church year in a Christian tradition. While Moser assumes, however, that the carnival customs were introduced by the church almost on purpose, Mezger sees in the early carnival rather economic necessities that arose due to the fasting regulations, which were accompanied by harmless amusements, which were then charged theologically over time. Mezger and Moser's work has in common that they overcome the folkish earlier research on Carnival, for example by Hermann Eris Busse and Wilhelm Kutter , and emphasize the Christian and Catholic components. According to Mezger, the "fool" as a figure of Carnival and its design with the usual fool attributes goes back to medieval illustrations of Psalm 52 .