As Vienna or Vienna rabbits is called a group of medium-sized breeds of rabbits that have a similar size and body shape. They are no colors beats a race, but independent races with its own history. The Viennese are named after the city of Vienna , as the Blue and White Wiener were first bred there. The following breeds belong to the group of Viennese rabbits in Germany: 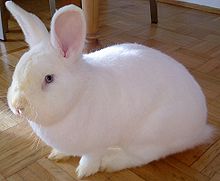 The White Wiener is a pure white breed of rabbit with blue eyes and a weight of 4 to 5 kg. The body is slightly stocky and cylindrical. In contrast to the White New Zealander , the White Viennese is not an albino , but a leucistic animal. This mutation affects a different gene than the albino series, the genetic formula of the White Viennese is indicated with A ----- x. If leucistic animals are crossed with albinos, the result is colored offspring in the F1 generation. The Austrian railway official Wilhelm Mucke (in some publications also Mucki) from Vienna is considered to be the breeder of the White Viennese . He believed that through displacement breeding from blue and white Dutch rabbits he had developed a white rabbit with blue eyes, which he first presented at an exhibition in 1907 after 15 years of breeding. Today it is known that the White Viennese is not based on displacement breeding , as probably the Husum blue eye of the breeder Hermann Ziemer from Arnstadt (named after Husum , his former residence) and the almost pure white Hotot , which has disappeared again , but on an independent mutation. Since the animals were relatively small according to their ancestry from Dutch rabbits , Mucke crossed white giants and white ram rabbits in order to achieve the desired middle breed analogous to the Blue Viennese, which was already known at the time. In Germany, the breeder Ernst Ordel, who obtained the first animals in 1910, did a lot for the breed. Since the White Viennese was the only medium-sized, pure white rabbit breed at the time , it was recognized and particularly promoted as an economic breed during the Nazi era , which contributed to its widespread use. It was not until the 1960s that the - albeit albino - white New Zealander came along as a medium-sized, white rabbit breed that was bred very economically. Today efforts are made to differentiate the somewhat lighter and more delicate physique of the White Viennese from the extremely blocky type of the White New Zealander. The White Viennese is still one of the most popular rabbit breeds today, in 2004 almost 15,000 young animals of this breed were counted as part of the breeding stock survey of the Central Association of German Racial Rabbit Breeders . 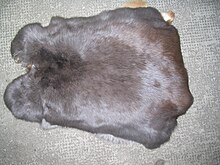 Stripped skin of a blue Viennese

The Blue Wiener is a plain blue, medium-sized rabbit weighing between 4.25 and 5.25 kg. The body should be slightly elongated and cylindrical. The Blue Vienna is one of the most famous and popular rabbit breeds.

The genetic formula of the breed can be given with ABCdg (German symbolism) or aBCdE (international symbolism).

Blue or wild blue rabbits have been known for a long time, but received little attention until the end of the 19th century. Around 1895, the official of the Viennese railway company Johann Constantin Schultz (born September 15, 1856; † February 9, 1909) from Vienna -Hetzendorf set himself the task of breeding the “Blue Vienna Giant”. According to his own statements, he used Belgian giants , French half aries and Lorraine giants . To what extent blue rabbits from Moravia played a role in the development of the breed is controversial in the literature. Blue rabbits are said to have been widespread in Moravia and were also delivered to Vienna as slaughter rabbits. Today there is a breed of "Moravian Blue Rabbits" in the Czech Republic and Slovakia , the color of which corresponds to the Blue Viennese, but is slimmer and somewhat heavier and more like the giant rabbit . The new breed was exhibited for the first time in 1895, and in 1897 it was recognized by the Austrian Breeding Association as the “Blue Giants”. In 1903 it was imported into Germany. The first few years of the breed were marked by a dispute about the direction, which primarily required a decision between two breeding directions. While some of the breeders were aiming for a blue giant rabbit and prioritized the question of weight over color, for another part the color of the animals they wanted as a middle breed was in the foreground. There were also discussions about the exact hue and the characteristics of the blue color. Initially, the Blue Viennese were partly blue-gray, that is, blue-wild-colored. 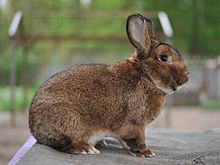 The Gray Vienna is also a medium-sized rabbit breed of the Blue Vienna type, but of a wild gray color. The gray Viennese can be traced back to the so-called "German rabbit", which was kept in large numbers even before the emergence of breed breeding and was listed in the first standard from 1893. It was a type that was more likely to be assigned to the small races and weighed up to 2.5 kg. No special requirements were placed on the color; in addition to wild gray, there were also piebald and other colored animals. The increasing number of other breeds replaced this type of rabbit and so they were no longer included in the standards. As part of the DC circuit in Nazism and the rabbit-in were Reichsfachschaft Committee rabbit of the Reich Association of German Kleintierzüchter summarized. The efforts of this organization included reducing the number of rabbit breeds and focusing on a few types that were considered economic breeds. In the course of these efforts, the German standard rabbit should also be created with a medium-sized, gray rabbit. However, these efforts met with little success. The breeding of gray animals in the format of Viennese rabbits was carried out by mating large chinchillas with blue Viennese. After another name change, the breed has been known as the Grauer Wiener since 1962 and can now be seen at exhibitions with some regularity. The gray Viennese is genetically a wild-colored animal, the corresponding genetic formula is ABCDG (German symbolism) or ABCDE (international symbolism). 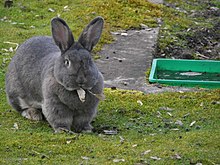 The black Viennese rabbit, a purely black Viennese-type animal, has been bred since around 1925. In shape and weight it corresponds to the Blue Viennese. Its hereditary formula is: ABCDg (German symbolism) or aBCDE (international symbolism).