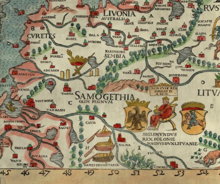 Part of Carta Marina where the whitens (naves frumentarie) are depicted.

Wittine at the Queen Luise Bridge

Wittinen (from Lithuanian : vytinė ; originally a wicker barge) were sailing barges for inland navigation in Lithuania .

The boats were roughly timbered from thin spruce wood, 20 to 65 meters long, five to seven meters wide, 1.5 to 1.8 meters side high and had no more than 1.2 meters draft . They were planked in clinker and Kraweel construction . They had a mast with a square sail , no top , with Bastseilen connected boards as cover . The high boards at the bow and stern tapered at an acute angle. On smaller rivers that could barges towed are.

From the 16th century to the first half of the 19th century, they were mainly used on the Memel and the Curonian Lagoon . They served Memel's trade with the Grand Duchy of Lithuania and Königsberg i. Pr. And were originally only intended for a single trip. After their actual use, the ships were either broken up to harvest wood or used for a short period in local traffic to transport building materials and the like. At the turn of the 19th century there were so many Wittinen on the Pregel that one could get from one bank to the other via the barges. In 1612 40 Wittinen sank on the Curonian Lagoon. In the early 20th century, only a few ships of this type were used.