His work as a teacher began in 1946 as a new teacher at the Annaberg vocational school . From 1951 he studied. He finished his studies in 1951 as a qualified trade teacher. In 1954 he received his doctorate in education.

In 1955, after being appointed, he began teaching at the TU Dresden , which led to his appointment as a lecturer in 1961 and in 1963 to his appointment as professor of data processing / mathematics. From 1964 to 1968 he was director of the Institute for Methodology of Mathematics and Natural Sciences . In 1968 he was awarded the title of Honored Teacher of the People .

Since 1969 he has also been responsible for the data processing department in teacher training. As director of the Vocational Education Section at the Technical University of Dresden , he performed specific tasks from 1972 to 1977. 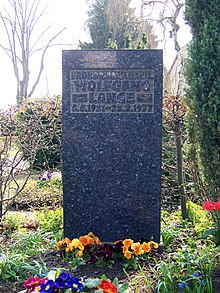 Grave of Wolfgang Lange in the Dölzschen cemetery in Dresden.

He wrote over 40 papers in the field of mathematics methodology as part of the training of young professionals. The contents of the publications resulted from practical school tests. From 1964 to 1968 , he headed a research group in Dresden in a complex experiment for the analysis and further development of mathematics lessons .

He also worked on the deepening and design of curricula, for example on the implementation of the "Mathematics Decision" of December 1962. His last work dealt with a skilled workers' book for data processing and the addition of the associated methodological notes for teachers.

He also worked in higher-level bodies such as the Central State Commission for Mathematics in the Ministry of National Education (MfV) (1) from 1962 to 1969. Since 1961 he has been working on the editorial team of the magazine Mathematik für die Schule . From 1969 he made his experience available to the Central Office for Education of the VVB Machine Computing .

He was also an active member of the Society for German-Soviet Friendship and the LDPD . After a serious illness, he died on February 25, 1977. His grave is in the Dölzschen cemetery in Dresden.