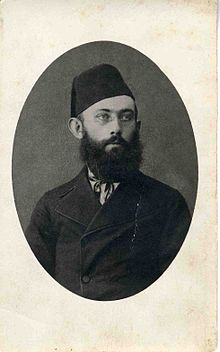 Zalman David Levontin (also: Salman Lewontin etc .; * 1856 in Orscha , Mogilev Gouvernement , Russian Empire , today Belarus ; † June 19, 1940 in Tel Aviv ) was a Russian-Jewish Zionist and financial expert, previously a member of the Chowewe Zion and one in 1882 the founder of Rishon le-Zion .

Born and raised in Russia, Zalman Levontin later became a businessman and banker. In 1901 Theodor Herzl made him one of the managers of the Jewish Colonial Trust. The main activities of the trust were carried out by the Anglo-Palestine Bank , which was founded by Herzl and Levontin on February 27, 1902 as a subsidiary called the Anglo-Palestine Company (APC).

Her starting capital was only £ 40,000. In 1903 the first branch was opened in Jaffa , headed by Zalman Levontin and which soon made a name for itself as a reliable and trustworthy institution. Business transactions and profit were not their real goal. In the early years, the bank supported Zionist activities such as land acquisition, imports, obtaining concessions, etc. Branches were opened in Jerusalem, Hebron, Safed, Tiberias, Gaza and Beirut, the economic center of the region at the time. The Anglo-Palestine Bank gave loans and long-term loans to moshavot and peasants. She helped build the first 60 houses in Tel Aviv.

From 1903 to 1924 Zalman Levontin was the manager of the Anglo-Palestine Bank in Jaffa, the forerunner of the Leumi Le-Israel bank .

Early on he had put his skills to the service of the Zionist movement, and he had succeeded in putting up a large-volume financial offer to make the Sultan willing to consent to the Jewish colonization plans. Levontin had been asked by Herzl in March 1902 to prepare letters of credit for three million francs; he was supposed to collect the money that was available to the Zionist movement around the world. Levontin managed to get the letters of credit issued in just one day and to bring them to the meeting of the Grand Action Committee, which took place in Vienna in March 1902.

His performance is also not diminished by the fact that the Sultan no longer accepted Herzl's offer or the Zionist movement because other financiers were in competition with the Zionists, namely the French politicians Ernest Constans (the ambassador at the time at the Porte) and Maurice Rouvier ( Rouvier had been French finance minister again since June 7, 1902, which, according to Herzl, further improved Turkey's strategic position), did the business that was supposed to serve to save the Ottoman Empire from financial ruin, but in fact the sultan at 1 Came to be £ 6 million more expensive than the Zionist offer. Obviously, the French bribes that made this deal a success had been higher.

Apparently the Sultan has capitalized on my presence. I was the Jew who was brought in to make the other competitors more pliable. It is done [...] I only have the pale satisfaction that the Turkish will be horribly ripped over the ears by the French crooks.

This political and financial chapter on the Bosporus , in which I almost played a role, is a rather curious piece of history. The French politicians Constans and Rouvier - les républicains d'affaires! - did business for their own pockets, but the Germans did business for the Reich. Because through the Unification, on which the Constans-Rouvier Compagnie makes stock market profits , Turkish revenues are released which guarantee the Baghdad Railway and the like. that's German influence. For example, German politicians paid the representatives of France a tip from the sultan's pocket for supporting interests that every French patriot must fight! And this society looks down on us Jews.