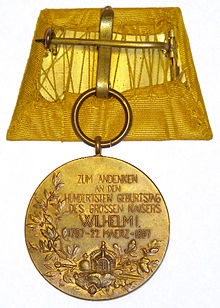 The so-called Zentenarmedaille (Centenarmedaille) was on 22 March in 1897 by Kaiser Wilhelm II. Emperor on the occasion of the 100th birthday of his grandfather Wilhelm I donated. Its actual name was "Medal in memory of the blessed Emperor and King Wilhelm I, the Great, Majesty".

The vernacular also called the award because of the color of the ribbon Lemon Order .

It was awarded to the Prussian state and university employees as well as all officers , military officials, NCOs and men who belonged to the active army and navy as well as the protection troops on that day ; likewise the surviving veterans from the wars of 1848/1849 , 1864 , 1866 and 1870/71 .

The 40 millimeter round medal made of bronze from captured artillery shows the portrait of Kaiser Wilhelm I turned to the right in an open fur coat and helmet. On the left side of it five lines in different sizes WILHELM / DER / GROSSE / DEUTSCHER / KAISER ; to the right of the portrait in three lines KOENIG / VON / PREUSSEN .

On the back of the medal is the six-line inscription TO REMEMBER / TO THE / HUNDREDTH BIRTHDAY / OF THE GREAT EMPEROR / WILHELM I / 1797 - MARCH 22 - 1897 . Including the imperial crown with imperial sword and imperial orb as well as the imperial scepter , resting on cushions, entwined with a laurel and oak branch .

The award was worn on a 37 millimeter wide, lemon yellow ribbon on the left side of the chest.

The Berlin medal coin L. Ostermann (formerly G. Loos) minted the medal. The design comes from Walter Schott . There are various unofficial imprints that differ more or less in the drawing, including those with a diameter of only 30 to 33 millimeters, this reduction was intended in particular for the medal buckle.