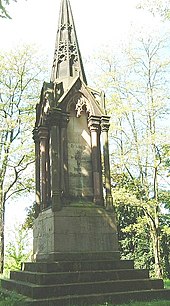 The Austrian Colony is a district of the independent city of Aschaffenburg with 1,656 inhabitants (as of December 31, 2018) and belongs to the administrative district of Lower Franconia in the Free State of Bavaria in the Federal Republic of Germany . The zip code is 63739.

The name Austrian Colony is derived from the “Austrian Monument” . The memorial was erected on a waste dump that remained from the time the railway was built and commemorates the Austrian soldiers who died in the battle of July 14, 1866 (see also Battles near Aschaffenburg ) in the German War . It was built in 1868 in neo-Gothic style based on a design by Georg Eberlein and was unveiled on July 14, 1868, the 2nd anniversary of the battle. Today there is a children's playground next to the artificial hill of the Austrian monument, which was landscaped and surrounded by tall chestnut trees. A memorial for fallen officers and graves of fallen soldiers from both sides are located in the Aschaffenburg old town cemetery.

The residential colony began on October 30, 1918 with the three-storey terraced house at Frankenstrasse 9 to 13, and after the First World War it was mainly built by housing associations in the form of up to four-storey tenement houses and two-storey terraced, single and semi-detached houses with front and kitchen gardens or left to the residents in heritable building lease. The drinking water was initially supplied through a connection to the rail network. The Austrian colony borders in the southeast on the route of the Goldbach - Aschaffenburg-Süd - Neuer Hafen railway, which opened in 1921 and closed in 1968, and the system of the allotment gardeners' association behind it.

Near the inner-city ring road, on the site of the former "Nees" paper factory, are the district administration, the Gutenberg school elementary school and the Fröbel school special needs school .

The pheasantry , which was laid out in the years 1779 to 1782 under Elector and Archbishop Friedrich Karl Joseph von Erthal (1774 to 1802), is a popular local recreation area. The Andriansdenkmal in the eastern foothills testifies to a saber duel between two forest candidates ( also known as Forstpollacken after their color ) in 1824, i.e. students of the former forestry college. Ferdinand Freiherr von Andrian was killed by his opponent at the age of 17.