Ala-Arriba! is a Portuguese drama from 1942. 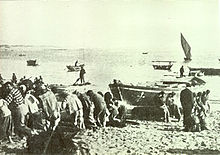 Ala-Arriba in Povoa da Varzim, model for the scenes in the film

Azulejos with an Ala Arriba scene

The film takes place in the fishing environment of Póvoa de Varzim , in northern Portugal. The film title goes back to the Ala-Arriba - called act of pulling the boat ashore by human power.

It tells the dramatic story of the love of a young fisherman for the daughter of a rival fishing family. The life of the fishermen, which is marked by human abysses, is shown in view of the existential dependence on the threatening sea. Their fateful relationship with the ocean and their sometimes grave psychological and material needs determine the close cooperation in the village community.

The film was semi-documentary and, apart from the two main actors, only shot with local fishermen as amateur actors. The striking facial contours of the fishermen, effectively staged in the contrasting light of the black and white film, are an essential feature of the work and reinforce its archaic authenticity. In addition to telling a dramatic love and family story, it is a documentation of the fishermen's reality, shown here in Póvoa de Varzim as an example.

The film is considered to be the first Portuguese film to win an award abroad. In 1942 he was awarded the Coppa Mussolini , the main prize at the Venice International Film Festival at the time, which was awarded for the last time that year.

Ala-Arriba! was released on DVD by Lusomundo in 2003, with additional short films and newsreels by the director Leitão de Barros , thematically matching the Fischer subject, as bonus material.