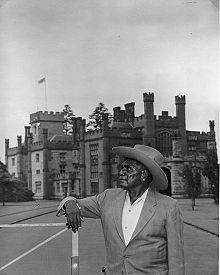 Albert Namatjira in front of the Government House in Sydney, 1947

Albert Namatjira (born July 28, 1902 in Hermannsburg , † August 8, 1959 in Alice Springs ) was an Australian painter and artist from the Arrernte tribe .

In 1938 Namatjira had his first exhibition in Melbourne , the exhibits of which, like the following ones in Sydney and Adelaide, were soon sold out. The next 10 years of his work also increased his fame. Queen Elizabeth II awarded him the Queen's Coronation Medal in 1953 and also met him personally in Canberra the following year .

He mainly painted landscapes and nature, but also tried wooden sculptures. When he got older, he wanted to build a house in Alice Springs. However, the purchase turned out to be difficult because he as Aboriginal , a ward was of the state, why not purchase real estate could. Due to its high popularity and after there had been many protests, he and his wife received full Australian civil rights in 1957 as the first natives of the Northern Territory and were able to buy the building plot.

His name is part of the lyrics in the popular Australian song I Am Australian , written in 1987 by Bruce Woodley ( The Seekers ).