In the case of electric railways, the corresponding components are referred to as starting resistors .

Defective air-cooled wire starting resistor for slip ring motors up to 1.5 kW from Bergmann Berlin , around the 1920s. The device has been opened, the porcelain winding body with the resistance wires can be seen clearly

In the case of starting resistors, either metals or electrolytes are used as resistance materials. There are three types of metal resistors:

In this type of construction, wires are used as resistance conductors, which are either wound onto an insulated support body or, in the case of thicker wires, connected in a self-supporting manner between insulators. Cantilevered resistance conductors are installed as a wire helix or in a meandering shape. Due to the poor heat dissipation, wirewound resistors can only be used for smaller drives.

Historically there were so-called graphite resistors. They were constructed in such a way that one or more metal plates were gradually pressed into a graphite-filled container during the tempering process. The electrically conductive graphite in the container was in the form of flakes. One pole was on the metal plates, the other on the housing of the resistor, which also served as a container for the graphite. A short-circuit contact between sheet metal and housing or between the actuating lever and the housing was provided for continuous operation. This design was mainly used for higher outputs. The effect corresponds to that of a liquid filler: the further the sheet is immersed in the graphite, the larger the contact area and the lower the electrical resistance of the arrangement.

For cast resistors, cast iron is used as the resistance material. The individual resistance elements are cast into plates with meandering rods and built into a housing. The resistance values ​​are determined on the one hand by the material and on the other hand by the length and cross-sections of the cast iron rods. In order to obtain different resistance values, different elements with different rod lengths and rod cross-sections are combined. Since cast iron has good storage capacities, these resistors are always used where motors are used in intermittent or short-term operation. Cast resistors are preferably used as starting and variable resistors in drive technology.

The liquid starter consists of a sheet steel container coated with epoxy resin , in which the resistance liquid and the electrode system are located. The electrode system consists of three fixed and three movable electrodes . The fixed electrodes are installed in insulated phase separation pots. The movable electrodes are connected to a bridge made of copper, so the starter works as a star point starter. Liquid starters are built and used for large slip ring motors with an output of up to 20 megawatts.

The electrolyte used is water (H 2 O) with "starter salt" sodium carbonate (Na 2 CO 3 ). The concentration depends on the required starter current. By immersing the movable electrodes in the electrolyte, the resistance value is reduced. In other systems, the change in resistance is achieved by pumping the electrolyte.

Simple systems for starting carousels worked with water and a pedal that moved the electrodes.

Liquid starters are very maintenance-intensive because the electrolyte concentration changes constantly as the water evaporates and splits up.

Historically, liquid starters were designed by immersing a sheet of metal in a metal container filled with an electrically conductive liquid such as starter soda. The deeper the sheet was immersed, the larger the contact area and the lower the resistance. One electrical pole was on the housing and one pole on the sheet metal, which was immersed in the liquid. There was no insulating coating. For continuous operation there was a short-circuit contact between the non-insulated part of the actuating lever, which was conductively connected to the resistance plate or one pole, and the housing on which the second pole was located. For three-pole starters, several metal sheets are required that are insulated from one another when switched off and that can either be electrically separated during operation (stator starter for squirrel cage rotors) or electrically connected by the same liquid bath (rotor starter for slip ring motors). The short-circuit contacts must also be designed in a corresponding manner. Historically, this type of construction was mainly used for high performance. 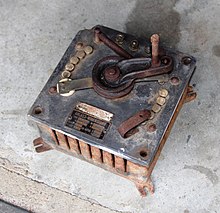 The same resistance as above, closed again. Easy to see: the brass sliding contacts of the tap changer and the housing with ventilation slots to allow the hot air to be discharged during operation

With air cooling , the starting resistors are either cooled using natural cooling or forced cooling. With natural cooling, also known as self-cooling, the cooling air is transported via the heat lift of the air. With forced cooling or forced cooling, the air is blown past the resistors by a fan. This results in better heat dissipation than with air self-cooling. Since air is a good insulator and can be easily brought in and out, air cooling is the most common type of cooling. The disadvantages are the low heat capacity of the air and the low thermal conductivity. That is why air-cooled resistors are only used in motors up to 2000 kilowatts.

With oil cooling , the resistance elements are built into a container that is filled with transformer oil . Transformer oil is a very good heat transfer medium and insulator. With oil-cooled resistors, there is around ten times better heat dissipation from the resistor than with air-cooled resistors. Since transformer oil is a good insulator, smaller minimum distances can be maintained between the individual resistance elements. Thus, transformer oil is a very good coolant. The disadvantage, however, is the slow release of heat via the container surface. In addition, transformer oil ages in operation and the insulation capacity is reduced by moisture absorption from the air. Oil-cooled starting resistors are well suited for high-performance electric motors, especially when the motors do not have to start frequently. They are used in slip ring motors with outputs of up to 12.8 megawatts .

In the case of water cooling , the heat lost from the starting resistors is transferred to the water via an intermediate carrier made of insulating material. Water has a high specific heat capacity and is therefore an almost ideal heat transfer medium . The heat transfer between resistance and cooling medium is between 10 times (with still water) and 100 times (with flowing water) higher in water than in air. To ensure optimal cooling, the water must constantly circulate and either be cooled using recooling devices or fresh water must always be supplied. The direct installation of starting resistors in the cooling medium only makes sense with water cooling for low voltages . At higher voltages, direct installation is only possible with great effort.

Historically, wire resistors with lower capacities were also sand-cooled, whereby the vessel of an oil starter was simply filled with sand . However, this design was only suitable if the associated electric motor should only be started very rarely. This is because the thermal conductivity of sand is poor and the heat cannot be removed quickly enough at higher switching intervals. In the 1920s, this design was used both for starters for smaller DC motors and for three-phase motors.

The circuit variant with only one starting resistor is called a Kusa circuit .

In the case of slip-ring motors with a lower output, roller conveyor starters with oil cooling are often used instead of the switchable individual resistors.

Starting resistors are not loaded in continuous operation, but in short-term operation. Several factors must be known or determined so that the resistors can also be dimensioned accordingly.

The starting frequency denotes the number of permissible hourly starts when the starting resistor is at operating temperature.

The overload factor ÜF can be determined in a table (manufacturer information) from the percentage duty cycle.

The power for short-term operation is the product of the calculated continuous power and the overload factor.

In the case of resistors, the inductance depends on the material properties of the resistor material used and on its design. Due to their design, starting resistors are relatively low in induction. In the case of steel grid resistors and cast resistors, the magnetic effects, due to the meandering course of the resistance conductor, cancel each other out. With wirewound resistors, the same effect is achieved by cross winding. For this purpose, two parallel windings are wound in opposite directions. The bifilar winding cannot be used at higher voltages due to the insufficient insulation between the conductors.