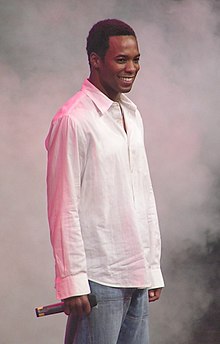 Anthony Montgomery (born June 2, 1971 in Indianapolis , Indiana ) is an American actor and a grandson of the legendary jazz guitarist Wes Montgomery .

He grew up in Indianapolis and studied at Indiana University , Purdue University and later at Ball State University , where he received his Bachelor of Science degree in "Performance Theater" and Drama.

In addition to various appearances as a stand-up comedian, Anthony also worked on the set of the film Hard Rain , where he both appeared as an extra and took on the role of production assistant. After he moved to Los Angeles for good, he made appearances on television series such as Charmed , Frasier and JAG, and a recurring role on Popular . He also starred in the horror film Leprechaun in the Hood and performed skits on the Tonight Show .

Before he got the role as Ensign Travis Mayweather on Enterprise , he tried twice on Star Trek: Spaceship Voyager , the first time as a member of the Voyager crew, the second time as Tuvok's son for the Voyager episode Displacement . There he made a good impression, so that he was later taken for the role of Travis Mayweather .

In April 2007, Anthony Montgomery signed a recording deal with AGR Television Records. His (hip-hop) debut album AT was released in October 2008.

His hobbies include diving, swimming, dancing and martial arts.