Star Trek: Enterprise (still in its first two seasons as an enterprise known) is an American science fiction - television series based on the US television from 2001 to 2005 UPN ran. It is the fifth real film television series to be set in the fictional Star Trek universe . The series is a prequel and takes place before all Star Trek series. After four seasons, the series was canceled by UPN. In fan circles it is abbreviated as ENT . The German synchronized version was broadcast by Sat.1 for the first time from March 2003 to July 2006. The new title was also used in some cases for the home theater releases of the first two seasons. Now only the new title is used.

The series starts in 2151 , about 90 years after the first contact with the Vulcan people (April 5, 2063) (see Star Trek: The First Contact ) and thus about 110 years before the first series Spaceship Enterprise .

For the first time in the series, a spaceship named "Enterprise" sets out to explore space and make contact with other species. At this point in time, the Vulcans are still very skeptical of people. The Vulcan first officer T'Pol therefore also has the function of a critical observer.

At the beginning of the series, there was still no “United Federation of Planets”, as was the “Supreme Directive”, which was often mentioned in the later series, and which forbids interference in the interests of less developed cultures. Techniques that were introduced on a daily basis, such as " beaming ", can still be seen here in their beginnings.

While the first two seasons essentially portrayed the crew's efforts to explore space and make contact with other life forms, the series took a turn in the third season. The earth was attacked and seven million people died. The Enterprise was supposed to find the perpetrator and went into a part of space in which the laws of physics were no longer unrestricted ( → see also: The expansion ). The series took on a much darker atmosphere and confronted the characters with a number of problems that forced them to abandon previously unshakable principles and made them appear significantly more complex and ambivalent. In addition, a common thread connected the individual episodes, so that viewers who missed individual episodes found it difficult to find their way back into the series.

In the fourth season they tried harder to establish connections to events in the later Star Trek universe. The storylines usually stretched over two or three episodes. After the threat of the third season was averted, the Enterprise returned to Earth, but initially got caught in the turmoil of the "Temporal Cold War". In the next three episodes, the "Eugenic War" (TOS: The Sleeping Tiger ) mentioned for the first time in TOS was taken up. Another multi-part series followed, which took the Enterprise to Vulkan, where Captain Archer and T'Pol caused a political upheaval on the planet; in the process they met T'Pau, a character familiar to viewers from TOS. The emergence of the "Federation of Planets" is the next focus of action of the fourth season. In several episodes it is shown how the Andorians , Tellarites and Vulcans came to an alliance through the mediation of earth . First the Romulans and later a fanatical sect on earth tried to prevent this union. One of the highlights of the series is the double episode Im sinsteren Spiegel , which takes place in the “mirror universe”. This alternate universe first appeared in TOS ( A Parallel Universe ). The connection to later events was made here by a spaceship, the USS Defiant - a sister ship of Kirk's Enterprise - which disappeared without a trace in the TOS episode The Spider Web and now reappears here. The episode also featured a different version of the first contact with the Vulcans than the one seen in Star Trek: First Contact .

The last episode of the series takes place in 2370, 215 years after the penultimate one. In this episode there is a reunion with Commander Riker and Counselor Troi , two characters from Starship Enterprise - The Next Century , they run the last mission of the first Enterprise, which took place in 2161, on the holodeck as a simulation. The episode refers to episode 161 (7th season, 11) "The Pegasus Project". With the help of Counselor Troi, Commander Riker seeks answers to the question of whether he should inform Captain Picard of the real reason for traveling in search of the Pegasus.

Well-known film actor Scott Bakula got the role of Captain Archer. For the role of T'Pol, the producers were looking for an actress who resembled Kim Cattrall , the role was cast with Jolene Blalock . 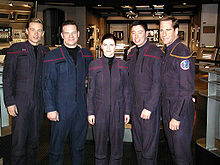 Conception and composition of staff

In June 1999 UPN reached out to producers Rick Berman and Brannon Braga to have a fifth Star Trek series produced. Berman, who was already responsible for the other Star Trek series, conceived a series together with Braga that takes place about 100 years before the Starship Enterprise . The idea was for the series to portray the first space explorers in the Star Trek universe, with Braga explaining that everything would be new to the crew and their response to situations would be more timely as the setting was closer in today's timeframe. They sought feedback from members of the United States Navy Submarine Service, which was reflected in certain design work on the series, such as the Starfleet uniforms. The original idea was for the first season to play almost entirely on Earth, to respond to first contact with the Klingons and to assemble the crew. This idea was rejected by the studio.

Berman acted as executive producer for the series and as showrunners were Brannon Braga and later Mann Coto. Also returned many Star Trek veterans such as Herman Zimmerman , who again contributed as production designer and illustrator. Marvin V. Rush resumed his work as a cameraman . He had previously worked as a cameraman since season three of Starship Enterprise . Some screenwriters from the Star Trek: Spaceship Voyager series such as Michael Sussman and André Bormanis also returned.

Of the 20 directors, David Livingston was the most frequently used with 15 episodes. Many of the directors had previously directed other Star Trek productions, such as LeVar Burton , Roxann Dawson , Michael Dorn and Robert Duncan McNeill had previously starred in one or more other Star Trek series and had become a star in this way -Trek experience gained. Only Barrett, Charleston, Contner, Grossman, Hedden, Norris, Straiton, and Whitmore first worked for the franchise.

The theme song Where My Heart Will Take Me was written by Diane Warren and sung by Russell Watson in 2001 . Under the title Faith of the Heart there was already an interpretation by Rod Stewart on the soundtrack to the 1998 film " Patch Adams ". The title was remixed in 2003 and used for seasons 3 and 4 from then on.

The production of the series was prematurely stopped after four seasons with a total of 98 episodes. The UPN TV station justified the measure with the low popularity of the TV audience. On average over the year, the series never established itself among the 100 most popular formats on US television. This fact led to conceptual changes at the beginning of the third season, which, however, did not affect the response from the audience. There were rumors that UPN would cancel the series at the end of the third season. This triggered strong fan reactions. Internet sites like SaveEnterprise.com called for general protests. A short time later, those in charge at Paramount and UPN were inundated by a wave of e-mails and phone calls.

On May 20, 2004, UPN finally gave in and commissioned a fourth season with 22 new episodes. At the same time, the broadcast date was moved from Wednesday to Friday in the hope that the series would be as successful there as the X-Files or Miami Vice before. UPN also made it clear that the series would be canceled if the ratings for the fourth season showed no improvement. At least fans and critics attested the fourth season a significantly increasing quality; Nevertheless, the ratings of the fourth season remained below the level hoped for, although UPN achieved very good results with the important target groups on this otherwise always very weak Friday broadcast slot with Enterprise, compared to earlier.

Despite further rescue attempts by the fans in the period before and especially after the announcement, UPN announced on February 2, 2005 that the series would be discontinued at the end of the fourth season. However, offers from fan campaigns to produce another season through donations (for example in Canada) were often rejected by Paramount, which ultimately led to the largest fan campaign to save Enterprise (TrekUnited.com) being official announced the end of rescue efforts on April 17, 2005. Thus “Star Trek: Enterprise” is the first Star Trek TV production since the original series (TOS), which was prematurely discontinued due to insufficient ratings.

In Germany, too, the expectations of the broadcasting station Sat.1 remained unfulfilled. At the beginning of 2004 the schedule was canceled, the series was moved from prime time to a less attractive slot on Saturday afternoon.

After it was first broadcast on Sat.1, it was repeated in 2009 on Kabel 1 on Sunday afternoons and, from 2013 to 2015, regular broadcasts on Tele 5 ; partly during prime time. From 2015 to 2017, the series ran on the specialty channel Pro7 Maxx and was shown in Switzerland on Puls 8 . Since 2014 the series has also been shown regularly on the pay-TV channel SyFy . The complete series has been available from the Netflix streaming service since 2016.

Integration into the Star Trek universe

The series contributes to increasing the inner coherence of the Star Trek universe: In the episode The Visitation , the mysterious and in part highly illegal Section 31 of Starfleet Security is mentioned for the first time - mainly thematized in Star Trek: Deep Space Nine ; in addition, with Dr. Arik Soong the ancestor of Dr. Noonien Soong introduced, the latter being the "father" of the android Lt. Commander Data from Starship Enterprise - The Next Century Is. The same episode also mentions the SS Botany Bay for the first time , the ship on which Khan Noonien Singh, the archenemy of Captain James T. Kirk ( TOS , Star Trek II: The Wrath of Khan ) is in cryostasis. Furthermore, there are many allusions to Star Trek: The first contact including a note about “holographic spheres”, as used by Captain Picard, or the alternate “first contact” to the Vulcans in the mirror universe, which in turn is based on events in the later series Star Trek: Discovery .

The series has so far been adapted for 17 novels, some of which will continue the series after its plot has ended (as of May 22, 2015). In these serialized novels, Tucker's death was revised at the end of season four.