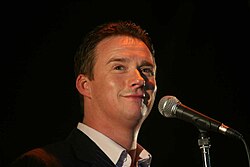 Watson has been singing since he was a child, but never hoped for a career as a professional singer, so he began earning a living as a factory worker in Manchester . Since he had to support his family, he began to earn additional money by singing songs by Elvis Presley and Neil Diamond in clubs and pubs.

The turning point in his career came one night at the Wigan Road Working Men's Club when the manager suggested that Watson try to sing Nessun dorma from Giacomo Puccini's opera Turandot . Although he is not a professionally trained singer, he sang the aria several times and was encouraged to perform other classical vocal pieces.

In 1998 he was invited to sing at Old Trafford during a break in the game to commemorate the Munich air disaster - a great privilege for him as he is a fervent fan of Manchester United . However, his performance was canceled at the last minute when the player Eric Cantona asked Mick Hucknall to sing for Watson.

In 1999 he sang the national anthem at the rugby cup final at Wembley Stadium , and finally at Old Trafford before the final game of the first division season between Manchester United and Tottenham Hotspur . After his team won the game, he went back to the field to sing the song Barcelona by Freddie Mercury and Montserrat Caballé . Meanwhile, he tore off his suit to reveal a Manchester United T-shirt. This performance ensured his success and just a week later he was invited to sing a full appearance at the UEFA Champions League final in Barcelona between Manchester United and Bayern Munich - in a duet with Montserrat Caballé.

His debut album The Voice followed in 2000, a mixture of arias and pop covers. It topped the UK Classical Music Charts and eventually number eight on the UK Album Charts . Together with the ex-Happy Mondays singer Shaun Ryder , Watson reinterprets the song Barcelona on the album . The Voice also includes a duet with Cleo from the girl group Cleopatra in the song Someone Like You . Cleo sings another duet with Watson on his third album Reprise in the song The Best That Love Can Be .

Watson sang the theme song Where My Heart Will Take Me for Star Trek: Enterprise in 2001 . The song was written by Diane Warren and originally sung by Rod Stewart under the title Faith of the Heart as part of the soundtrack for Patch Adams starring Robin Williams . In 2003 it was remixed for the third season of Star Trek: Enterprise in order to master the decline in viewers of the series with a more modern interpretation of the theme song. In 2002, Watson sang live at the opening ceremony of the Commonwealth Games in England.

He released the single Nothing Scared - A Song for Kirsty in late 2002 to raise money for the Francis House Children's Home in Manchester. The £ 5 million campaign was led by Kirsty Howard, a then seven-year-old girl with a serious heart defect. The song reached number 17 on the UK Singles Chart . Watson won a Classical Brit Award for Album of the Year 2001 and 2002, and also for Best Selling Debut Album (2001) and Best Selling Album (2002).

On the BBC's vocal show Just the Two of Us , Watson was the professional singing partner of actress Siân Reeves from the TV series Cutting It . Together they won the show's first season on March 5, 2006. Also in 2006 there was a collaboration with Jeff Wayne for the live production of the musical The War of the Worlds , of which a DVD has also been released. In 2009 Watson sang in the world premiere of the English-language concert version of the musical Kristina från Duvemåla , which was written by ABBA composers Benny Andersson and Björn Ulvaeus .