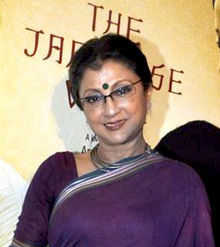 Aparna Sen was born as Aparna Dasgupta into a Bengali family. Her father was the critic and filmmaker Chidananda Dasgupta . At the age of 16 she made her film debut as Mrinmoyee in Satyajit Ray's film Teen Kanya ( Three Daughters , 1961). In 1965 she appeared in Mrinal Sens Akash Kusum and from then on she worked regularly in Bengali films until the late 1970s , but also had some appearances in Hindi films. She later worked with Ray and Sen several times, including in Ray's short film Pikoo (1980), where she played the role of an adulterous wife and mother.

In 1969 she played in the English Merchant - Ivory production The Guru ; two more of these Anglo-Indian co-productions followed in 1970 with Bombay Talkie , and in 1978.

She appeared in Mrinal Sens Ek Din Achanak (1989) and Mahaprithivi (1992), a reflection of the reunification of Germany, as well as in Rituparno Ghosh's award-winning film Unishe April (1994) or her own film Paromitar Ek Din (2000).

In 1981 Aparna Sen made her debut as a director with the film Farewell Road (36 Chowringhee Lane) , for which she also wrote the screenplay. The film about an aging English teacher who is still living in Kolkata three decades after Indian independence earned her not only critical acclaim but also a National Film Award for Best Director and the Grand Prix (Golden Eagle) at the Manila International Film Festival .

Sens's film 15 Park Avenue (2005) is a story about a schizophrenic woman (played by Sens's daughter Konkona) and her relationship with her older stepsister (played by Shabana Azmi ).

Aparna Sen is the editor of the fortnightly Bengali women's magazine Sananda .

Aparna Sen is currently married for the third time and has two daughters from their two previous marriages. She has two grandchildren from her older daughter Kamalini.