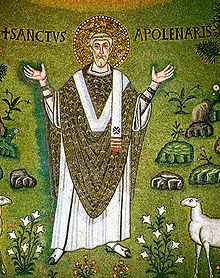 Depiction of Apollinaris in a heavenly green landscape surrounded by 12 sheep; Apse mosaic from Sant'Apollinare in Classe in Ravenna (6th century)

Scenes from the life of Apollinaris, stained glass in Notre-Dame de Chartres (1205–1215)

Apollinaris (* Antioch ; † buried in Ravenna ) is considered the founder of the Christian community of Ravenna, was its bishop and died a martyr .

To the St. Apollinaris has many legends . Some report that he was appointed bishop by Peter himself and that he lived around 75. He was mistreated and tortured in an attack by non-Christians.

According to other legends, he survived the abuse and went to Dalmatia to do missionary work there . According to this tradition, his life is dated around the year 200.

The Legenda Aurea mentions a great number of the saint's miracles.

The grave of St. Apollinaris lies in Ravenna. In 549 the Basilica of Sant'Apollinare in Classe, named after him, was inaugurated above his grave. His relics were transferred to the church of Sant'Apollinare Nuovo in Ravenna in the middle of the 9th century , since the other basilica was too easily accessible to looters due to its location. Today relics can also be found in the Apollinaris Church in Remagen , in Gorkum , Dijon , Reims and in the Lambertus Church in Düsseldorf .

Apollinaris is venerated as the patron saint in Ravenna, Remagen and Düsseldorf. The largest fair on the Rhine in Düsseldorf is celebrated on his name day.

In art, Apollinaris is depicted in a white robe with a black cross. As insignia he wears the bishop's staff and a club with which, according to legend, he was killed.

The saint's Catholic feast day is July 20th. In the Orthodox Church it falls on July 23.