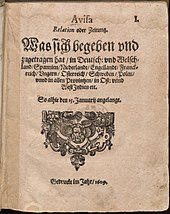 Aviso Relation or Zeitung is one of the first German-language newspapers to be published regularly (in their case weekly ) . The first edition appeared on January 15, 1609 in Wolfenbüttel .

It was subtitled: What happened and has happened / in German: vnd Welschland / Spannien / Netherlands / Engellandt / France / Vngern / Austria / Sweden / Poland / and in all provinces / in East: and West India etc.

The name Aviso means letter, announcement or message. The editor and printer was Julius Adolph von Sons . After his death, the newspaper was published by Elias Holwein until at least 1627 . The last edition of the newspaper appeared probably on December 15, 1632.

It is considered to be the second oldest newspaper in the world, after the Relation of all princes and memorable histories from Strasbourg in Alsace , which was first published in 1605 . The content came from the political correspondence of Duke Friedrich Ulrich von Braunschweig-Wolfenbüttel , who at that time still resided in Wolfenbüttel. News came from various European cities, including Vienna, Rome, Antwerp and Cologne, and was accordingly of a political-diplomatic-military nature and compiled for an elite readership. The position of the Aviso was Protestant .

In the Gottfried Wilhelm Leibniz Library in Hanover there is a completely preserved edition from the first year of 1609.