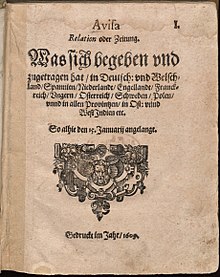 Von Söhne took over a printing company in Wolfenbüttel in 1605, which had existed there since 1539. He had received the title of court printer. In his office (printer's workshop), funeral sermons, occasional pamphlets and ordinances in particular were printed. Furthermore, he was the editor of the second oldest German-language newspaper , the " Aviso Relation or newspaper ", the first edition of which appeared on January 15, 1609 in Wolfenbüttel. Previously there had only been “handwritten newspapers”. In addition, the printed news reports came from correspondents from several German or European cities, such as Cologne, Antwerp, Prague, Vienna, Rome and Venice. However, there was no regional news.