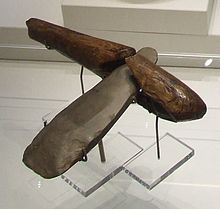 Ax with the remains of a handle

Mining area at the Pike of Stickle

The ax manufacture of Langdale (also called Great Langdale ; English Langdale Ax Factory or Langdale ax industry ) took place in the Neolithic in Great Langdale near Windermere in the Lake District in Cumbria in England . The name industry was given by archaeologists around 4000 BC. Specialized stone tool manufacture began in the "Charnwood Forest", in "Mount's Bay", in "Penmaenmawr", in " Tievebulliagh ", in "Whin Sill" and in Langdale.

The existence of the manufacturing facility was assumed by chance discovery in the 1930s, which was followed by more systematic research by Clare Fell and others in the 1940s and 1950s. The area has outcrops of fine-grained green or chert , which are suitable for the production of cut stone axes. The stone is an epidotized greenstone quarried from the scree slopes in the Langdale Valley on the Harrison Stickle and the Pike of Stickle. Geological mapping has shown that the volcanic tuff used for the axes appears in a narrow area of ​​the tallest peaks. The archaeologists are able to identify the unique nature of the Langdale stone through petrography , as the minerals in the rock have a characteristic pattern.

Langdale's industry produced rough-hewn axes and simple blocks. The end product was usually made in a different location, e.g. B. at Ehenside Tarn on the edge of the Lake District. The Langdale tuff was one of the most common rocks used to make axes in the Neolithic, known as Group VI axes. Flint was also widely used and mined in flint mines in several locations , most notably in Grimes Graves and Cissbury, or in continental Europe in Spiennes in Belgium and Krzemionki in Poland .

In examining about 2000 Neolithic axes from finds in England and Wales , Bill Cummins found that 27% of the axes were made from the green volcanic tufa of Great Langdale. Most of the Langdale axes were made in Lincolnshire and the East Midlands . The British Museum's 1978 catalog of 368 Neolithic axes found in the Thames lists 15 from Langdale. The Langdale axes have also been found in Northern Ireland and Peterborough.

The greenstone was created by the penetration of a narrow vein of tufa into the volcanic rocks of Great Langdale. Tees and hundreds of ax fragments have been found on the scree slopes of the Pike of Stickle . Even today, Great Langdale is very remote and the ascent to the source of the stone material is arduous. Presumably, the axes were distributed across the country through long chains of gifts exchanges between persons of high status, so that the distribution areas of the axes of several stone deposits can overlap.

Many of the axes found in eastern England have been used; others show no sign of wear. They are often found in damp places, as if they were intentionally placed there as offerings.