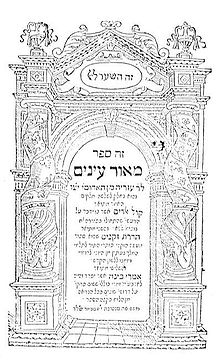 Azaria (h) (Bonaiuto) dei Rossi ben Moses (* around 1511 in Mantua ; † 1578 ibid.) Was an Italian-Jewish humanist , doctor and historian. He is considered the most important Jewish scholar of the Italian Renaissance .

Azaria was born in Mantua around 1511 as the son of the Min ha-Adummim family (= of the Reds), one of the most important families of Italian Jewry. According to him, the family had been brought to Italy by Emperor Titus after the Second Temple was destroyed . Azaria received his basic training in Mantua. After studying medical and historical sciences, he settled as a doctor in Ferrara, then lived in Ancona , Sabbioneta and Bologna . When Pius V drove the Jews out of his domain in 1569, he moved again to Ferrara, where he wrote his main work. Here he experienced the great earthquake of 1570. Towards the end of his life he returned to Mantua, where he supervised the printing of his Meor Enajim . He died in 1578.

Azaria was the first to use the works of Jewish-Hellenistic literature, which had been forgotten in Judaism, to control the Talmudic - rabbinical tradition and - hostile to contemporaries - became a forerunner of the scientific debate on Judaism. Among other things, he proved that the Jewish year count "since the creation of the world" only came from the Middle Ages, as did Josippon , who was believed to be an ancient source .

His most famous and important work is the three-part MEOR Enaim ( enlightenment of the eyes , ophthalmoscope , Mantua 1573-1575) containing reports, a translation of the Aristeasbriefes and various treatises:

In Safed the ban (cherem) was planned over the book to be burned, but was no longer carried out because of the death of Josef Karo . Finally, the rabbis in Mantua forbade all youths from studying the book before they turned 25 (and even after that it was only allowed with the consent of the local rabbinate).

Only the enlightened contemporaries of Mendelssohn knew how to appreciate dei Rossi's achievement. No medieval Jewish script was drawn upon by Christian scholars to a greater extent than that book.