The term Berber music generally encompasses several musical traditions from North Africa - especially the Maghreb - which are played in the broadest sense by members of the various Berber peoples and due to their limitation to a few instruments (long-necked loutar , frame drum tar , beaker drum darbuka , double-reed instrument rhaita , wooden flute gasba ) and can be described by their more rhythmic, mostly cyclical and therefore partly trance-like character, which also includes improvisational parts .

Music was a rather rare occurrence for most of the residents of the Maghreb and mainly took place at celebrations such as weddings, circumcisions and other larger gatherings such as pilgrimages ( moussems ), cattle markets ( suqs ), etc. Religious holidays such as the festival of the breaking of the fast ( ʿĪd al-Fitr ) at the end of Ramadan or the Islamic New Year festival ( achoura ) were accompanied by music. In a smaller but very significant context, it also served to support the - sometimes danced - meditation exercises of the various Sufi brotherhoods ( zaouias ). Many of these old traditions have since been lost and so Berber music has become more of a commercial event overall. 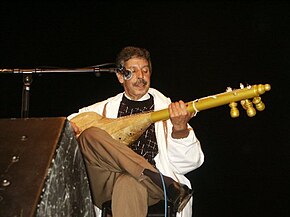 In the Berber regions, which are largely characterized by agriculture and cattle breeding (goats, sheep, donkeys) - in comparison to other cultural areas - there has been hardly any development of living conditions over millennia and the associated cultural refinement of customs and tastes. In addition, there was no development towards an urban way of life or even to larger rulers and so the family and the tribe or the village remained the basis of coexistence and individual and collective thinking. Nonetheless, the Berbers came into contact with other peoples repeatedly in the course of history and thus with the music of Arabia , Black Africa , Andalusia and - since the second half of the 20th century - also with western rock and pop music and thus above all the blues , whose basics are based It is widely believed that slaves were brought to North America and developed there first on the sugar cane plantations of the south, and later in the cities of the north ( Detroit , Chicago ).

Rock and jazz musicians such as Jimi Hendrix , Brian Jones , Ornette Coleman , Jan Garbarek and others. a have been inspired by Berber musicians and the sometimes psychedelic sounds of their playing; some even played with them.

The Berber music of Morocco can and must be divided into different regions, in which different traditions and thus different sounds have developed, all of which await further investigation.

The musical traditions of Algeria also differ from region to region. In the north, d. H. in Kabylia , Berber, Arabic and - in the music of Raï - also western elements of pop music mix . Singers such as El Hajj Muhammad El Anka , Cheikh El Hasnaoui or Abdelkader Chaou were known around the middle of the 20th century . The Aurès Mountains also have their own, but so far hardly noticed, musical tradition. The south of Algeria, on the other hand, is under the influence of Tuareg music.

The Tuareg , who live as nomads and caravan traders in today's states of Algeria , Mali and Niger , represent a special case, whose way of life and thus their culture are affected by both Berber and black African influences. Due to their wandering life, they came into contact with almost all regions of North Africa, for whose music they were quite receptive. Today's music by this ethnic group, many of whom are striving for their own state, is heavily influenced by Western influences - especially the blues . Groups like Tamikrest or Tinariwen or singers like Bombino combine African-Berber and Western musical elements to a high degree in their instrumentation (electric guitar etc.) and create a truly unifying atmosphere in their performances.