Occupation of the Ottoman Bank

The attack on the Ottoman Bank on August 26, 1896 was the occupation of the Ottoman Bank in Istanbul by members of the Armenian Revolutionary Federation (Dashnak Party). They demanded the independence of the six Armenian provinces and threatened to blow up the bank and the 150 hostages. Through French intervention, the perpetrators escaped without being prosecuted. As a state reaction to this, there were bloody attacks on Armenians in Istanbul, which resulted in around 6,000 deaths. 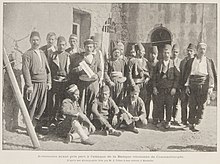 Surviving hostage-takers upon arrival in Marseille

One of the main planners was the publisher Haig Tiriakian . In order to draw the attention of the main European powers to the massacres of the Armenians , which had been going on since 1894 , 28 armed men and women, led primarily by Papken Siuni and Karekin Pastırmacıyan , took over on August 26, 1896 at 1 p.m. local time Bank which hired mostly European staff from Great Britain and France. The Ottoman Bank at the time served as a financial center for both the Empire and countries of Western and Northern Europe. The members of the Armenian Revolutionary Federation wanted to focus on the massacres ordered by Sultan Abdülhamid II .

Armed with pistols , grenades , dynamite and hand bombs, the men and women entered the great hall of the Ottoman Bank. Formed in small groups, they were approached by one of the guards, which triggered an exchange of fire with the security personnel. The takeover of the bank lasted 14 hours and resulted in the deaths of ten of the attackers, including Papken Siuni. His role as leader of the operation was taken over by Karekin Pastırmacıyan. The attackers threatened to blow up the entire building including the 150 hostages if their demand for independence was not met. They didn't steal anything from the bank.

The intervention of French diplomats gave the assassins safe conduct. The hostage situation was well received in the European press.

In the following two days were after presentation of the British chargé thousands beaten with clubs and iron bars to death in the city living Armenians of "softas and other fanatics." According to the Austrian military attaché in Istanbul, the central Ottoman authorities instructed the mob to "begin killing Armenians for a period of 48 hours, regardless of age or gender." The killing did not stop until Sultan Abdülhamid ordered it. They killed 6,000 Armenians. For the 48 hours of bank takeover alone, the estimates of the number of deaths were between 3,000 and 4,000.

Three weeks after the bank takeover, a massacre took place on September 15, 1896 in the city of Eğin ( Akn ) in the eastern Sanjak of Harput ; Eğin was chosen because the leader of the bank squatters, Papken Siuni, was born in the city. According to a report by the French ambassador , Ottoman forces killed “at least 2,000 Armenians” in Egin, including “many women and children”. A report by the British consul in Harput, quoting figures from an Ottoman official, found 1,500 killed, including over 200 women and children. Of the 1,500 houses in the Armenian quarter of Eğin, 980 were robbed and burned down. According to another report from the British Consulate in Harput, there was an "indirect order" from the Sultan that "the Armenians of Egin are intended to instigate brawls and that the local authorities should 'take the necessary action'". The same report said that there was no revolutionary movement or anything like that and that the victims of the massacres had not caused any nuisance; some pistols and revolvers were found in the ruins of the burned down houses. The representatives of the main powers expressed their disapproval in a letter of protest to the Sultan. The Egin massacres are seen by historians as a "case of collective punishment through mass murder".

In Western Europe, attacks on the Armenian civilian population overshadowed the bank takeover itself. Grover Cleveland , then President of the United States , condemned "the anger of insane bigotry and cruel fanaticism"; the "not uncommon reports of the willful destruction of houses and the bloody slaughter of men, women and children made martyrs of their Christian faith."

“I do not believe that the dire prospects that currently exist in Turkey will long be permissible to offend the face of Christianity. It tarnishes the human and enlightened civilization that belongs to the end of the 19th century so much that it hardly seems possible that the sincere will to treat the good peoples in the entire Christian world properly will go unanswered. "

Cleveland refused military intervention by the US military to protect the Armenians in the Ottoman Empire, instead offering accommodation to "those who seek to avoid the dangers that threaten them in Turkish domains."