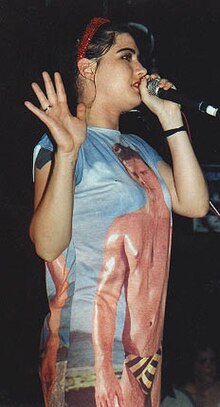 Bikini Kill is an American punk band that shaped the riot grrrl movement in the 1990s. It was founded in Olympia in October 1990 . The band became known for their feminist lyrics and intense live performances.

Although they occasionally collaborated on an artistic and political level with well-known artists such as Nirvana (drummer Tobi Vail was dating Kurt Cobain for a while) and Joan Jett , Bikini Kill rejected major labels and the mainstream music press. After two albums and several EPs, the group broke up in 1997. The best-known successor project to Bikini Kill was Le Tigre , in which Kathleen Hanna was active. In May 1998, The Singles was another compilation album from the Kill Rock Stars label , which compiled the three published singles including the respective B-sides. The Russian group Pussy Riot named Bikini Kill as a role model.