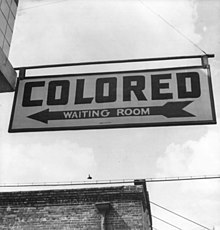 Sign from 1943 pointing to a waiting room for colored people

The Black Codes were local and state laws in the United States that restricted the human rights of black Americans , especially ex-slaves.

The Black Codes are primarily associated with the Southern States and after the American Civil War and before the Reconstruction . Contrary to popular belief, however, the first such laws were introduced in some northern states in the early 19th century .

Early Black Codes in the Midwest

Ohio , Indiana , Illinois , Michigan and Wisconsin joined the union as free states. However, in the early 19th century, white citizens of these states demanded regulations and laws that curtailed the rights of blacks trying to settle in or travel through their areas. In some cases, this has resulted in laws banning blacks altogether from owning land , entering into contracts, or settling in certain states. Ohio passed one of the first laws against immigration of freedmen in 1804. In 1813, Illinois followed suit, banning free black settlers from settling on its territory.

The more successful the movement to abolish slavery, for example in the establishment of the Underground Railroad , the more counter-efforts there were among the "negrophobic" whites of the north. Indiana passed a "Racial Misclosure" law in 1845. In some states, racial laws were elevated to constitutional status in the 1840s. Article 13 of the Indiana Constitution of 1851: “ No Negro or Mulatto shall come into, or settle in, the State, after the adoption of this Constitution. "(" No negro or mulatto may enter or settle in the state after this constitution comes into force "). The Illinois Constitution of 1848 introduced one of the toughest anti-black laws in the United States. The Illinois Black Code of 1853 extended the ban on entry to the state for blacks.

After the civil war

The reconstruction policy of US President Andrew Johnson (1865–1869) led to the 14th and 15th amendments to the United States Constitution , which enshrined the equality of these population groups; the 13th Amendment was passed by Congress while Lincoln was still alive. Between 1865 and 1866, individual southern US states such as South Carolina , Mississippi and Louisiana adopted the constitutional amendments from the north. 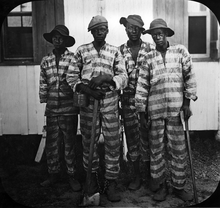 Prisoners who were leased out as lumberjacks in Florida around 1915

These laws also affected the former slaves , who after their liberation again subjected them to regulations and restrictions and denied them basic rights. These varied from state to state, but they basically included restrictions on the freedom of choice of profession, choice of location or choice of spouse and the prohibition of testifying in court. An example of a Black Code introduced in the southern states after the civil war was lost is the one passed in Alabama in 1865. The Black Code, which banned "vagabonding" and the poaching of labor, primarily restricted the mobility of black workers and ensured that the plantation owners continued to have a pool of labor available who were unable to enforce higher wages.

However, after the war was won, the North saw the Black Codes of the South as an attempt to reintroduce slavery through the back door. The radical Republicans who controlled Congress initially successfully prevented the implementation of the Black Codes in the southern states. Instead, Congress passed the Civil Rights Act of 1866. In a forced election in 1866, in which the freed slaves could vote, the opponents of the Black Codes won a majority that allowed them to override all Black Codes. This also guaranteed the implementation of the 14th Amendment to the Constitution.

Only after the end of the Reconstruction, which is dated to the year 1877, the white southerners were able to enact discriminatory laws again in the late 19th century, which became known as Jim Crow . The measures included voting taxes and linking the right to vote with a review of writing and reading skills. This new regulation made it possible to a very large extent to exclude the black population from elections. But it also affected the poorer white population, so that politics in the southern states was predominantly determined by the wealthy white class.

Douglas A. Blackmon argues in his Pulitzer Prize- winning non-fiction book Slavery by Another Name that these black codes also provided the pretext for sentencing blacks to several months' imprisonment on the basis of banal and even fabricated allegations. They were then rented to plantations, sawmills and mines for forced labor ( convict leasing ) or were ransomed by private individuals and companies on payment of a deposit, provided they were willing to sign a bondage contract at the same time . This left them vulnerable to living conditions that were harsher than those that enslaved people experienced before 1860.

This situation only changed after the American civil rights movement in the 1950s and 1960s expanded political influence to other sections of the population and political and economic discrimination against the black population of the southern states ended. Only then did the economic relations between the northern and southern states begin to converge.